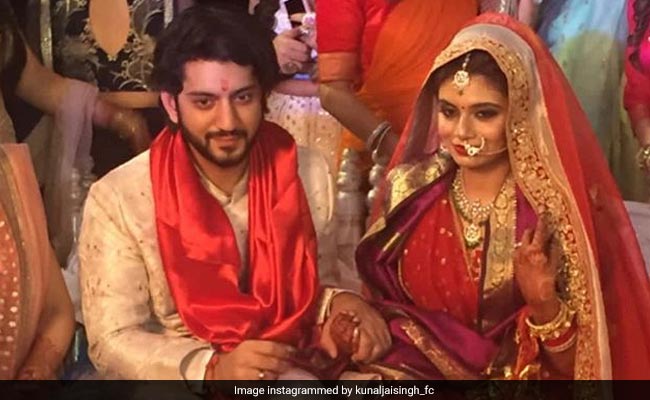 Television actors Kunal Jaisingh married his longtime girlfriend Bharati Kumar recently and the couple hosted their wedding reception party on Thursday in Mumbai. Photos from the couple's wedding festivities hit the Internet and went crazy viral. The couple's pre-wedding ceremonies included a sangeet function, where both the actors performed to some romantic Bollywood numbers. For the wedding, Bharati wore a red lehenga with kundan jewellery while Kunal opted for a white and cream sherwani. Kunal Jaisingh and Bharati Kumar's wedding was a private affair, which was attended by family members and close friends. For the reception party, Bharati looked gorgeous in a saree and Kunal looked suave in a navy blue suit. Neither Kunal nor Bharati shared photo from their wedding festivities on social media as of now.

Take a look at the photos from Kunal Jaisingh and Bharati Kumar's wedding festivities:

Kunal Jaisingh, best known for portraying Omkara Singh Oberoi in the popular TV series Ishqbaaz, got engaged to Bharati Singh earlier this year. Kunal made the big announcement via an Instagram post.

Take a look at the photos from Kunal Jaisingh and Bharati Kumar's engagement:

Kunal Jaisingh and Bharati Kumar reportedly met on the sets of The Buddy Project, which aired between 2012 and 2014. Bharati, an actress and model, has also featured in shows like Yam Hain Hum, Humse Hai Liife and Ishaa. Apart from Ishqbaaz Kunal also featured in TV shows like Yeh Hai Aashiqui, Doli Armaano Ki and Pyaar Tune Kya Kiya on his resume.