Here's What Mithila Palkar Posted After The F.R.I.E.N.D.S Reunion. Wait, Is That Central Perk? 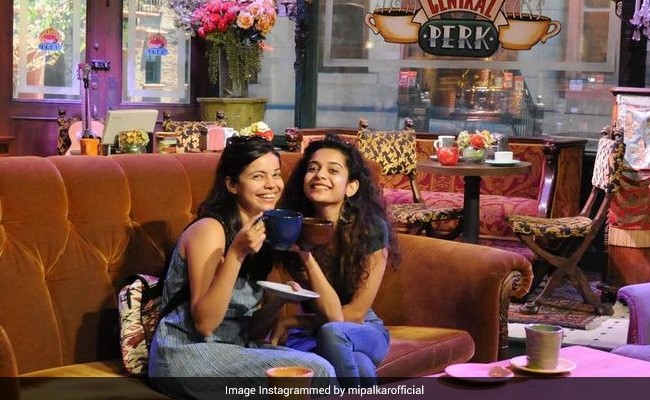 It was a double dose of nostalgia for actress Mithila Palkar on Thursday, as the F.R.I.E.N.D.S fan dropped pictures from her trip to the set of the show, after watching its Reunion special episode. In the pictures, Mithila Palkar is joined by her "best friend." While one picture features the duo sipping on coffee in Central Perk, another one captures them posing outside it. Mithila shared two more pictures of herself and her friend, as they posed outside the stage of the show. Sharing the pictures on Instagram, the 28-year-old actress revealed that it was her "best friend" who introduced her to the show.

TermingF.R.I.E.N.D.Sas her "go-to source of entertainment" the actress wrote: "On the set of F.R.I.E.N.D.S with my best friend who introduced me to the show that still is my go-to source of entertainment when I want something light to watch (which basically has been through this entire lockdown time)." Talking about the much-awaited Reunion special episode of the show, Mithila sent a "virtual group hug" to all her fellow- F.R.I.E.N.D.S fans. "How could I not have obsessed over this today? The reunion episode was full of feels! Virtual group hug to everyone who felt the feels and bawled their eyes out #FRIENDSReunion #FRIENDS," she wrote in the caption of the post.

Many fans of the actress as well as the show dropped comments on her post. Using the very famous Chandler Bing reference, a fan asked a very important question and wrote: "Could you BE any luckier?"

The F.R.I.E.N.D.S Reunion, was announced last year and was meant to air in 2020 but it was delayed due to the COVID-19 pandemic. The show is now streaming on OTT platforms HBO Max and Zee 5. It is undoubtedly one of the most loved sitcoms of all times. The show first aired in 1994 and had a successful 10-year-long run. With Jennifer Aniston (Rachel Green), Courteney Cox (Monica Geller), Lisa Kudrow (Phoebe Buffay), Matt LeBlanc (Joey Tribbiani), Matthew Perry (Chandler Bing) and David Schwimmer (Ross Geller), in the lead roles, the show continues to be one of the most watched sitcoms.

Coming back to Mithila Palkar, the actress began her acting career with several web-based show. She became a household name after starring in the show Little Things . Mithila made her Bollywood debut with Nikhil Advani's Katti Batti . She was last seen in Netflix based film Tribhanga co-starring Kajol.