Helicopter Eela: Kajol And Nysa's Smile Says It All About 'Last Night' 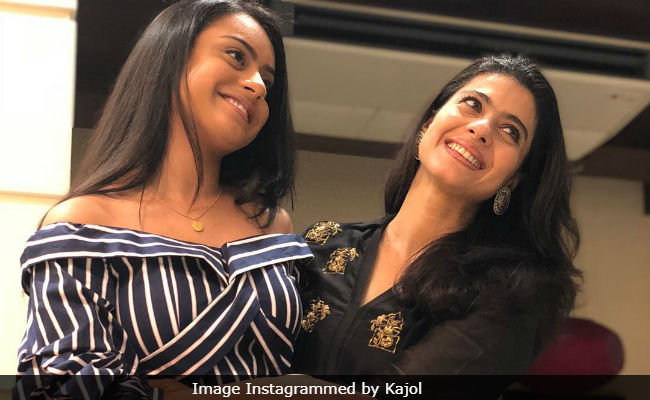 Kajol's latest Instagram post, featuring her daughter Nysa Devgn, is making the Internet happy. On Thursday, Kajol shared a picture of herself along with her 15-year-old daughter on Instagram and we must tell you that mother-daughter duo look absolutely stunning in the picture. The photograph seems to be from the Helicopter Eela screening which was organised in Mumbai on Wednesday (going by the caption on Kajol's post). In the picture, Kajol can be seen dressed in a black and golden outfit, while Nysa looks pretty in a striped off shoulder crop top, which she paired with blue denims. Kajol captioned the post: "About last night... Special screening." She accompanied the post along with the hashtags "#somuchlove" and "#overwhelmed." The picture garnered over 1 lakh likes on Instagram.

Take a look at Kajol and Nysa's picture here:

Needless to say, Kajol and Nysa share a great bond and Kajol is often seen documenting her love for her daughter on social media. Nysa was present when Kajol's wax statue was unveiled at the Madame Tussauds museum in Singapore. Kajol shared a picture from the event and wrote: "My little girl with me on a red carpet for the first time."

My little girl with me on a red carpet for the first time .....

When my baby smiles the whole world blooms..... #bicestervillage #summerlovin

Remember the throwback picture that Kajol shared on Nysa's birthday this year and wrote: "From crayons and teddy bears to a young lady. Happy birthday to my smart ,beautiful , brave , cuteness overload and seriously humbling daughter Nysa. May the sun shine out of your eyes always and may you always walk in."

From crayons and teddy bears to a young lady. Happy birthday to my smart ,beautiful , brave , cuteness overload and seriously humbling daughter Nysa . May the sun shine out of your eyes always and may you always walk in

In an interview, earlier this year, Kajol explained how Nysa studying abroad has strengthened their bond and told DNA: "I don't know whether we have gotten closer, but we definitely don't fight as much as we used to. Things just don't seem as important as they were when you lived with that person under the same roof."

Nysa is Kajol and Ajay Devgn's elder child and she is completing her higher studies in Singapore. The couple are also parents to 7-year-old Yug, who stays with them in Mumbai. Kajol married Ajay Devgn in the year 1999.

Kajol currently waits the release of Helicpter Eela, which will open in theaters tomorrow. Directed by Pradeep Sarkar, the film showcases the journey of a single mother, who is over protective about her college-going son (played by Riddhi Sen) and tries to control his life. The film also features Neha Dhupia and Tota Roy Chowdhury and it has been co-produced by Ajay Devgn.