Harry Potter 20th Anniversary: Return To Hogwarts Review - The Film Does Not Deliver Much Magic Of Its Own

Harry Potter 20th Anniversary: Return to Hogwarts - The film is more to inveigle the Potter fan base than to provide insights into the technique and craft that went into the eight films. 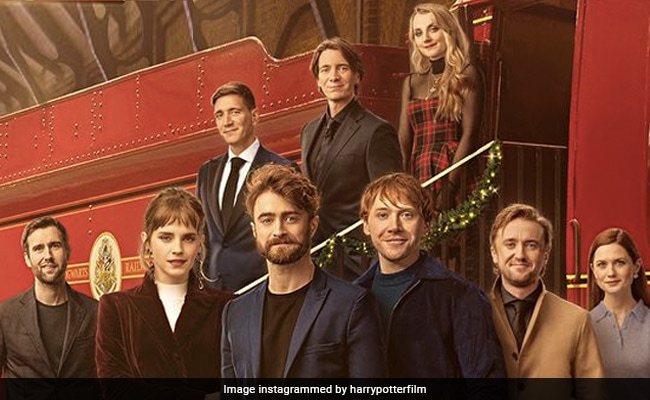 Meant to be a trip down memory lane for Potter-maniacs worldwide, Harry Potter 20th Anniversary: Return To Hogwarts is just that, no more, no less. It is a warm, charming and broadly informative documentary that reunites the actors and filmmakers behind the movie franchise that, along with the J.K. Rowling books the films were adapted from, became one of the biggest global pop culture phenomena of our times.

As with any legacy-linked project, the efficacy of this lookback hinges squarely on the passion that it is able to whip up among the viewers, a large swath of whom will probably, like the three principal actors whose fond memories constitute a key part of the film, be in their early 30s and would have grown up and felt deeply connected with the magical adventures and life lessons delivered by the eight films of the franchise.

Our guess is the 100-minute film will set off at least a fitful wave of memories of an eventful decade of filmmaking that ended ten years ago but still retains the power to excite and entertain. But, inversely, isn't the Harry Potter series (2001-2011) still fresh enough in our minds for them not to need feature-length treatment by way of a celebration of what they meant to all those who made the journey within and around the films?

Alternating between the vibrant and the emotional, Return to Hogwarts conjures up several bright flashes. It, however, only sporadically transports us to nooks and crannies that the films and the continuously disseminated trivia associated with them did not already. This is a lengthy dive but not a particularly deep one. It is at best a feel-good movie about the world that the films were located in.

Split into four parts, with each part devoted to two films, Return To Hogwarts intersperses interviews of the key cast members with behind-the-scenes footage, outtakes and film clips to piece together a narrative about how important the franchise was not only in shaping the careers of Daniel Radcliffe, Emma Watson and Rupert Grint, among others, but also in bringing together "the British royalty of the acting world".

Radcliffe, Watson and Grint (the last-named has the biggest say presumably because of the availability factor), from fireside couches in the Gryffindor Common Room, hold forth on their experiences during the filming and the kinship they formed over ten years. Also reminiscing about the making of the films are the four directors (Chris Columbus, Alfonso Cuaron, Mike Newell and David Yates), producer David Heyman and cast members Matthew Lewis, Tom Felton and Alfred Enoch who hark back to the past at Gringotts.

One of the most significant aspects of the Harry Potter movies was that they allowed us to watch Radcliffe, Watson and Grint grow into adults in 'real' time on screen, a passage that coincided with the growth of the films from soft and fairy tale-like (the Columbus-directed Harry Potter and the Philosopher's Stone and Harry Potter and the Chamber of Secrets) to dark and devilish (a shift that begins with Harry Potter and the Prisoner of Azkaban, which saw the introduction of Gary Oldman as Sirius Black), thanks to the depredations of Lord Voldemort (Ralph Fiennes, whose nose-less visage is accorded more than a passing reference) and Lucius Malfoy (Jason Isaacs).

The recollections of the young trio, which constitute an important thread in Return To Hogwarts, cover the entire time-span from their first joint audition as endearing pre-teens to the emotional goodbyes on the last day of the shoot. Fiennes and Isaacs, too, get in on the act and share on camera what they were called upon to achieve and what they took away from the experience as actors.

The film reveals the awkward moments that led up to Watson and Grint's kiss in the final film, the on-set crushes that the young actors had on the older ones (Watson on Felton, Radcliffe on Helena Bonham Carter), the grief at the passing of co-actors and mentors, the lead actress' near-pull out from the franchise (a fact that is merely touched upon but not followed through with additional info about why she opted to stay on despite feeling that "the fame thing had hit home in a big way". Yes, she and Grint do discuss what the feeling was like but the film does not pursue it any further.

Return To Hogwarts perks up perceptibly with the arrival of Helena Bonham Carter, who, like the cackling, cantankerous character she plays in the Harry Potter universe, is a bit of a gale force with the power to sweep everyone off their feet. She puts Radcliffe in a spot by revealing a note that he wrote her during the shoot wishing that he was born a decade later to be old enough for her. There aren't enough of such candid moments in the film, but the ones that are do serve to heighten the appeal of the exercise.

Among a couple of major things that are missing in the documentary, one should be immediately obvious to every viewer: J.K. Rowling, the writer of the Harry Potter books. Her transphobic views may have forced Warner Bros to distance the film from her. Rowling is mentioned a few times by those interviewed. However, her own voice is extracted from interviews recorded a couple of years ago and it is confined to the subject of the cinematic transformation of her books. The books per se do not receive any upfront play in the film.

The only time one of the books is directly mentioned is when Mike Newell, director of Harry Potter and the Goblet of Fire, describes the tome that the film is based on as the fattest of them all, "like a doorstop", with "an energetic core to it".

It is pretty obvious that the purpose of Return To Hogwarts is more to inveigle the Potter fan base than to provide insights into the technique and craft that went into the eight films. The only technician who is mentioned by name is production designer Stuart Craig and his sets make it into the discussions. It might have helped had the camera and VFX departments, too, found their way in.

All said and done, Return To Hogwarts knows its constituency pretty well and serves up joys and diversions that it will respond to. The film is packaged for easy, even piecemeal, consumption. It is about witchcraft and wizardry, star power and fandom, but it does not deliver much magic of its own.