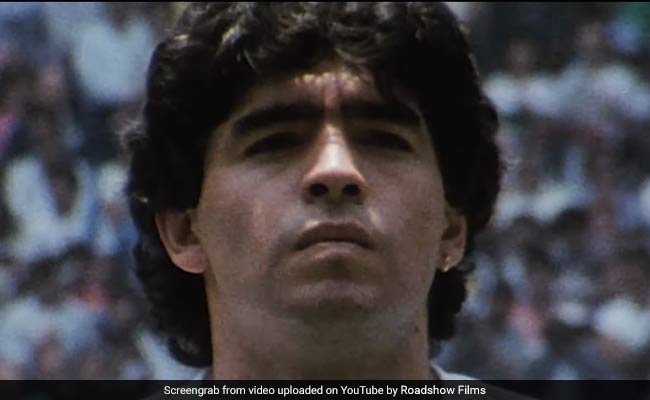 Documentarian Asif Kapadia makes nary a wrong move as he weaves his way through and around the turbulent career of Diego Maradona, arguably the world's greatest-ever footballer. The rollercoaster nature of the story Kapadia narrates perfectly captures the triumphs and trials of a life that might have been far more sedate had it been less ordinary. As Maradona's personal trainer at SSC Napoli says - all interviews done for the film are audiotaped and not on camera, a device that works felicitously - that the man's life was "tremendous and terrible". Both ends of the spectrum find full play in Diego Maradona.

A 130-minute film obviously cannot take everything into its sweep. Hundreds of hours of archival footage and innumerable interviews with the Argentine football legend himself and his family, friends, associates and journalists had to be waded through, sifted and stitched together to yield a cohesive narrative. The effort yields a result that is never less than impressive.

Kapadia, the maker of Senna and Amy, both of which rank among the greatest biographical documentaries of our times, packs all that an audience needs in order to grasp the phenomenon and the enigma that Maradona was - and still is. Not that the film tries to answer every question that we might have about a man dangling between dizzying heights and desperate lows. It leaves a great deal for fans of football in general and Maradona in particular to go beyond the details the film places on the table and complete the picture that they want to hold in their minds.

Diego Maradona is unlike the Bafta Award-winning Senna and Oscar-winning Amy because the achiever it is about is still alive and the story does not have an end. Kapadia's previous two documentaries probed eventful lives that were cut short. The man at the heart of this film is still very much among us, and therefore we get to hear much of the story in his own voice.

Diego Maradona focuses on the icon's seven-year stint with the lowly-placed Italian club SSC Napoli. This defining phase of his career saw him going from the pinnacle of demigod status to the pits of a slew of personal and legal problems. It presents a fascinating portrait of a man who grew up in rough part of Buenos Aires, then had the world at his feet and finally, perhaps for that very reason, lost control of himself even as he was at the peak of his prowess.

Maradona's move in 1984 to the unfancied Napoli from the all-powerful FC Barcelona, where he had an eminently forgettable time, is, by his own admission, prompted by a desire for "peace" and "respect". The transfer fee was a world record then, but the club bosses gave him a flat when he asked for a house and a Fiat though he had demanded a Ferrari. He, however, earned abundant popular adulation - 85,000 spectators packed Stadio Sao Paolo in Naples simply to welcome him to the Italian club on July 5, 1984.

As his game soared into the stratosphere, both for club and country, his fame spread but not always in the ways that he would have wanted. Maradona also earned respect and awe both from fans and contemporary players, but peace eluded him except when he was on the pitch. He was put on the same pedestal as San Gennaro, the patron saint of Naples. But he turned out to be a God with feet of clay.

Maradona inspired Napoli to two Italian championship titles - the club's first - and fired Argentina to a glorious World Cup triumph in 1986. On the pitch, he says in a voice interview whose pieces are strewn across the film to provide insight into the man's mind set, one forgets life and all one's troubles. The magic that he created with his feet on a football field was his escape life, where the stocky, temperamental Argentinian great was never at his best. He fathered a son in Naples - he, of course, was in denial for many years - when his girlfriend/wife Claudia was two months pregnant back in Buenos Aires.

Diego Maradona is more than a football film. It is about a flawed genius and the price he pays for achieving super success in what is regarded as Italy's most dysfunctional city. It unveils the perils of fame and money for a Buenos Aires slum kid who rose to the very top of his game without ever following the straight and the narrow path. Personal indiscretions and his hobnobbing with the Neapolitan mafia pushed him towards drug addiction. He confesses that he would be routinely on cocaine until Wednesday and would then cleanse himself in time for Sunday's game. This went for weeks and the transgressions took their toll when the lid was blown off the veneer of greatness.

When the scandals involving prostitutes and drug dealers erupted, the protective shell that the quality of his football and his string of successes gave collapsed and he became a sitting duck for the press, the judicial system and the tax authorities. When he left Naples, he was a lonely man, a hero fallen from grace.

It is obvious that Diego Maradona's life is a gripping cautionary tale. Kapadia turns into a remarkable documentary film for the ages, an essay on sporting greatness and human frailty scripted on a lively canvas with a combination of enormous flair and unwavering restraint.