Diana Penty Enjoyed This View On Her Boat Ride In Kerala. Pic Here 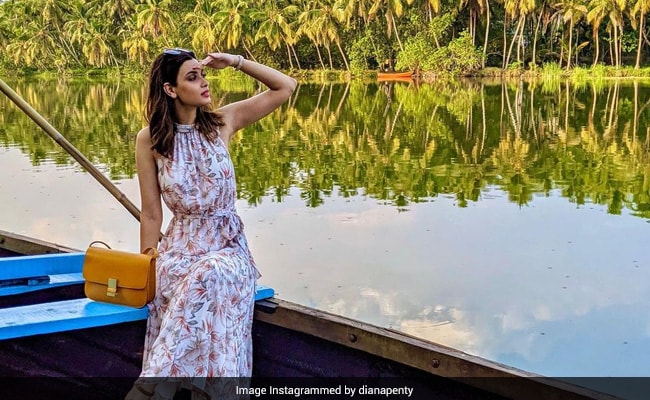 Do you like pun-filled one-liners? If that's the case, Diana Penty's latest post will impress you. The actress just shared a picture from a boat ride in Kerala and captioned it as, "It was a-boat time I got to the lake." Along with fans, her friend actress Dia Mirza was impressed with the description too. The comment read, "Ha ha good caption." The Cocktail star is seen posing in a beautiful white summer dress with a line of coconut trees in the background.

This is not the first instance that Diana took the pun route to make a post. Last time, we saw her reading a script and sipping tea. But what caught everyone's attention was the caption, "Mul-tea-tasking #TeaWithD." And then, the actress shared a reel and said, "Don't you see? It's a necessi-tea! Duh."

Diana knows it all when it comes to the trends of Instagram Reels. If you don't believe us, then watch the 'I'm so pretty' challenge.

Diana is shooting for her debut Malayalam film Salute. She will share screen space with Dulquer Salmaan. In a snap with the Bangalore Days actor, Diana announced, "Cheers to new beginnings! Looking forward to the ride." Celebrities like Farah Khan, Aditi Rao Hydari, Kajjal Aggarwal wished the star good luck for this project helmed by Rosshan Andrrews. The story is by the writer duo Bobby-Sanjay.

Dia Mirza's Emotional Post On Death Of Niece: "Tanya Was Like A First Born Child To Me"