Cannes 2016: A Blockbuster Premiere of Steven Spielberg's The BFG 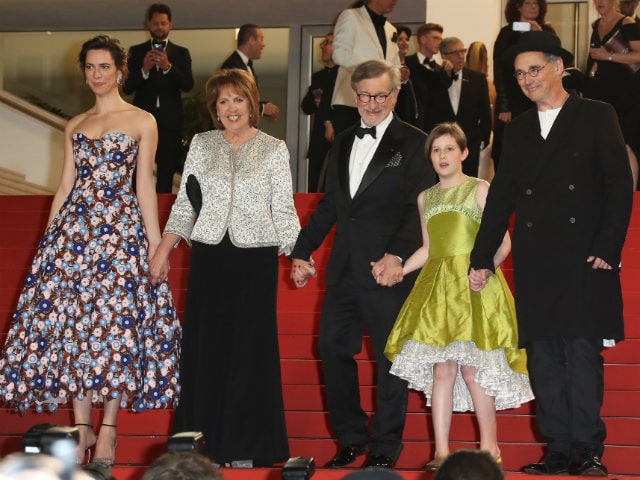 France: Steven Spielberg said that he still believes in magic as he premiered his whiz popping The BFG (The Big Friendly Giant) in Cannes on Saturday, to a mixed response from critics.

Spielberg described the fantastical tale of a giant who snatches a frightened young Sophie from an orphanage and takes her to live with him in Giant Country as: "Probably the closest I have ever come to telling a love story."

Sophie quickly realises the giant, the runt of the litter he comes from, is a gentle vegetarian, who tries to save her from the "canny-ball" giants with names like Bloodbottler and Fleshlumpeater.

"All of us have to believe in magic. The worse the world gets the more magic we have to believe in. That magic will give us hope and hope is everything for me," Spielberg told reporters after a press screening of the film.

The Guardian hailed the performance of Mark Rylance, who starred in Spielberg's last film Bridge of Spies, as the gentle giant, in the "beautifully wrought" adaptation.

Variety said: "The Splendid adaptation makes it possible for audiences of all ages to wrap their heads around one of the unlikeliest friendships in cinema history, resulting in the sort of instant family classic 'human beans' once relied upon Disney to deliver."

However, others struggled to wake their inner child, with The Wrap saying, it "misses the magic".

Spielberg, who used to read The BFG to his seven children, said that with this movie, he was revisiting his past love for "stories from the imagination".

"When I do history movies the imagination has to be put aside. I felt liberated, I felt like I could do anything on this and it brought back feelings I had as a younger filmmaker," he said.

The movie was a long time coming, and has been tinged with sadness, with the death of Melissa Mathison, who adapted the book, and who also wrote the script for E.T. last year, aged 65. Producers also initially wanted to cast Robin Williams as the giant before his death in 2014.

"It was a tremendous challenge to have the technology catch up with our ability to tell the story in the way we did," said producer Kathleen Kennedy.

The book remains true to Roahl Dahl's work with a few tweaks along the way, which has the giant taking Sophie along with him as he catches dreams and releases them among sleeping humans.

Tired of the other bully giants, who eat children while the BFG has to eat disgusting snozzcumbers, Sophie and the giant ask the queen to help deal with them.

It was the scenes at Buckingham palace that drew the most laughs: The awkward giant is served a delicious breakfast, but has the queen, her guards and corgis all 'whizzpopping' when he offers them a drink of his gas-inducing 'frobscottle.'

"We will see what the queen thinks when the time comes won't we," said Spielberg, whose superyacht The Seven Seas is parked off the French Riviera for the 12-day festival.

Roahl Dahl dedicated his book, which became an instant bestseller when it was published in 1982, to his daughter, Olivia, who had died of measles encephalitis two decades earlier.

Mr Dahl, a fighter pilot and spy, who also scripted James Bond movies, wrote some of the most-loved children's literature of the last century.

Several of his books, including Charlie and the Chocolate Factory, James and the Giant Peach and Matilda, have already been turned into major films.