Bioscopewala Movie Review: Geetanjali Thapa carries the burden of holding the film together with confidence and conviction. 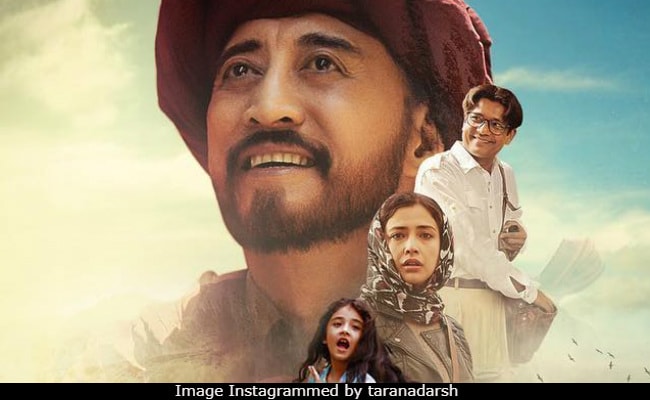 As loose an adaptation of a short story as any ever attempted, Deb Medhekar's Bioscopewala takes the kernel of Rabindranath Tagore's fabled Kabuliwala and turns it, on one level, into an affecting meditation on paternal love, bereavement, loss and redemption. On another, the tender, warm, pensive film, set in contemporary Kolkata and Afghanistan, ruminates upon the ravages of war and time, the repercussions of religious bigotry and the regenerative power of stories that humans tell, no matter where they come from.

First-time director Medhekar, who also wrote the film's screenplay with inputs from Radhika Anand, imparts a mellow tone and distinctive visual texture to Bioscopewala, which is as much a celebration of the manifestations of humanity across cultural boundaries as an ode to cinema as a means of both recreation and rebellion.

The well-crafted film is wonderfully served by a fine cast and its cinematographer Rafey Mahmood, whose lighting and angles imbue the frames with dynamism and an air of immediacy as two individuals, separated by geography, social moorings and age, seek desperately to reconnect with emotions that once defined their deep bond but have inevitably faded with time.

The passage of time may dim the glow of moving images just as it can reduce the intensity of human feelings, but do they ever vanish altogether? In Medhekar's take on Tagore's timeless classic, they certainly do not; if anything, they assume new depth and urgency. Like the hand impressions of two five-year-old girls imprinted on a piece of cloth keep the titular protagonist from disintegrating in the face of a series of misfortunes, memories of life-affirming connections of yore help a grieving girl surmount the untimely loss of her father.

Bioscopewala is the story of Rehmat Khan (Danny Denzongpa), a man uprooted from his homeland. He depends upon his bioscope for livelihood and emotional sustenance. Having lost his makeshift cinema hall in his small Afghan village in a vicious attack by Taliban militants, he lugs around the contraption, chased by children clamouring for a view.

Fleeing the conflict in his country in the early 1990s, he ends up in Calcutta, where he befriends five-year-old Minnie (Miraya Suri), the only daughter of a widowed fashion photographer who is acutely aware of the things that he has left unsaid to the person dearest to him.

The story, credited to producer Sunil Doshi, takes many a liberty with Tagore's original work, published 126 years ago, in order to give it a contemporary spin. The departures do not, however, in any way dilute the spirit of the tale. The 'Kabuliwala' here does not sell dry fruits and shawls nor does he lend money to loan seekers. He isn't a Pashtun either. He belongs to the persecuted Hazara community.

Other plot details are done away with (like Minnie's mother), substantially modified (for instance, with regard to the circumstances that lead to Rehmat killing a man and being jailed) or added (in the form of a few characters that do not exist in Kabuliwala).

Bioscopewala opens in the present. A tragedy strikes Minnie (Geetanjali Thapa). Her father Robi Basu (Adil Hussain), who is on trip to Kabul after having penned a confessional letter to his daughter, dies in a plane crash. Minnie rushes back home from Paris, where she studies cinema, for the last rites.

The arrival of a mysterious, Alzheimer's-stricken old man, who is warmly received by the family retainer Bhola (Brijendra Kala), nettles her. But as she plunges into unravelling the mystery behind her father's voyage to Afghanistan, memories of her bonding with Rehmat, the bioscope man of her childhood, begin to waft back. The presence of the 70-year-old man in the house now assumes a new significance.

Minnie ferrets for more information about what happened to Rehmat during the past 25 years and, in the process, encounters a Sonagachi sex worker Wahida (Tisca Chopra) and Ghazala (Maya Sarao), a woman who escaped the flesh trade trap. The two women fill her in with different aspects of Rehmat's life, which help Minnie make up her mind to make a bid to reunite the man with his own daughter back in Afghanistan.

The performances in Bioscopewala are first-rate. Danny Denzongpa gets so completely into the skin and soul of Rehmat Khan that it is difficult to separate the actor from the character. He leaves us wondering why we do not see him more often in substantial roles.


Promoted
Listen to the latest songs, only on JioSaavn.com
Geetanjali Thapa, who is on the screen far longer than any of the other actors in the cast, carries the burden of holding the film together with confidence and conviction. Hers is finely tuned performance. It takes her minimum effort to exude a combination of melancholy and resolve.

The supporting cast is effective too. Adil Hussain, Tisca Chopra, Brijendra Kala and Ekavali Khanna do full justice to their significant cameos, adding to the tapestry that Bioscopewala creates in its attempt to capture, and transmit, the humanist core of the Tagore story. A sparkling little gem, applause-worthy all the way!