Karan Patel is one the three guests sent by Bigg Boss to interact with the housemates. 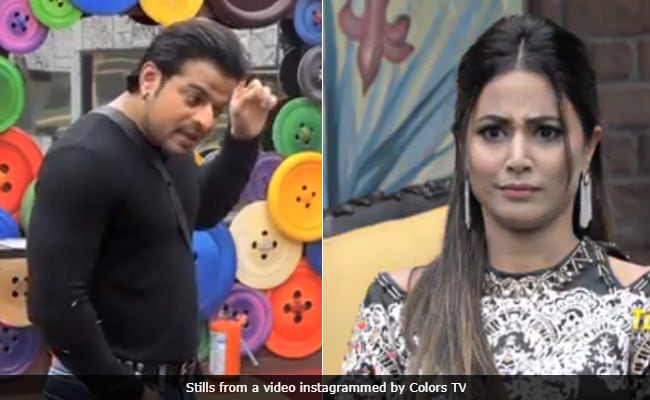 New Delhi: Actress Hina Khan's stars in Bigg Boss house are not aligned in her favour or so it seems. In last night's episode Hina met her boyfriend Rocky Jaiswal, who proposed to her and when he exited Hina had a complete breakdown (overreaction much, alleged Twitter). But when Gauri Pradhan told Hina off for calling her husband "spineless" is when Twitter cheered the most. In tonight's episode, Hina Khan will come face to face with another celebrity from the outside world, who has a problem with Hina retracting from her statements. Actor Karan Patel (of Yeh Hai Mohobbatein) will enter the house tonight and tell Hina Khan that she can't fool the crores of people watching her outside by simply feigning innocence. Apart from Karan Patel, former Bigg Boss contestants Rohan Mehra and Karishma Tanna will also enter the house. Karishma clearly doesn't like Vikas Gupta.

The housemates are grilled by our special guests with some tough questions! Keep watching #BB11 to witness all the drama! @KARISHMAK_TANNA@TheKaranPatelpic.twitter.com/g7Smt6tJlB

In the previous weeks, Karan Patel was one of the many celebrities to slam Hina Khan was making derogatory remarks about the contestants and then shirking away from the responsibility of owining her mistakes. On social media, Karan Patel critical tweets were matched by Rocky Jaiswal, who defended Hina through and through. Last month, Karan Patel twisted the name of Hina's show Yeh Rishta Kya Kehlata Hai to Yeh Ghatiyapan Kya Kehlata Hai and wrote:

This was Rocky's reply:

#YehGandiAadatein Sudhar jaaye toh baat karna ! Not taking names and still taking Digs is not smartness but cowardice! Support your friend but don't go personal on others and if u have d guts do it openly! Yeh sab log aise hi hain it seems, Hit n Run #DostKeJaisaDost#ZubaniMardhttps://t.co/fFtb6KOC3L

Promoted
Listen to the latest songs, only on JioSaavn.com
In the last two episodes, the contestants met their family members and friends as a part of the task. And now, host Salman Khan is all set to grill the contestants for the unruly behaviour in the house.