Actor Amyra Dastur Is Holidaying At This Celeb-Approved Location. Any Guesses? 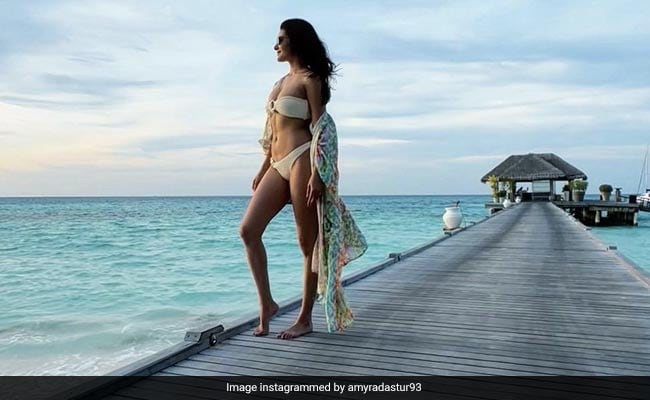 The Maldives has given a call to Amyra Dastur. And, guess what? She has answered that call with aplomb and how. The much-acclaimed holiday destination has won Amyra Dastur's heart. We know it from her social media posts. Her latest entry in her beach journal gives us the perfect definition of a beach holiday. She wrote, "Tan skin. Salty hair. Barefoot. Ocean air." Along with this caption, Amyra has attached a dreamy snapshot where she stands by the ocean in a white bikini. A multicolour shrug adds breeziness to her look. Around her, we see the blue skies and the turquoise ocean waves. Take a look:

A must-have sunset postcard also graced Amyra Dastur's Instagram page. The actress posed in a bikini. Here, she sits in a hammock in the middle of the ocean. Don't miss the shades of orange and pink across the sky. Amyra has captured the essence of the scene in her caption, "Nature's farewell kiss of the night."

No one can stop Amyra Dastur from going back to the beach. The actress had visited the Maldives last year too. We'll run out of words to tell you how she enjoyed her time there. And, if there's a way to redefine Monday blues, Amyra did it in the best way possible. She showed up in a bikini and a black see-through dress as she posed by the ocean. The blue hues of Maldives charmed her. Her caption read, "The perfect kind of Monday blues."

When not physically present in the Maldives, Amyra Dastur takes a walk down memory lane to relish the sun-kissed moments spent there. Here's one of her "take me back" Instagram posts as she misses the beaches. Amyra posted a photo by the beach in sizzling swimwear. She wrote, "Saturdays should be spent in the sun, on the sand and by the sea."

On the work front, Amyra Dastur was last seen in the film Koi Jaane Na and the web series Tandav. She will be next seen in the Kannada film Bagheera.