The picture happens to be from the Hollywood Beauty Awards 2018 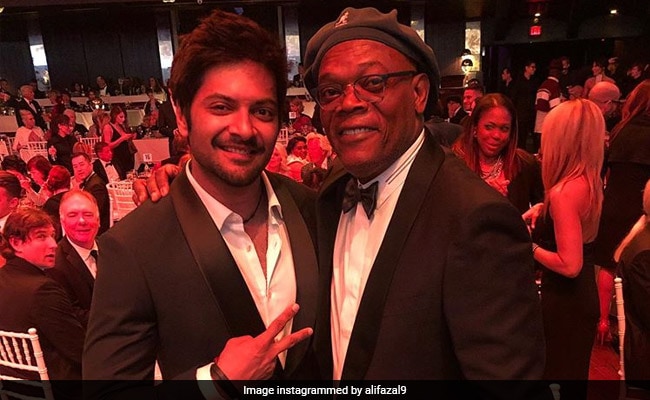 Ali Fazal's latest entry on Instagram deserves your attention. The actor, on Tuesday, made a trip down the memory lane and fished out a throwback picture of himself, which also stars Hollywood actor Samuel L Jackson. In the photograph, both Mr Jackson and Ali Fazal can be seen dressed in black blazers and matching trousers. The picture happens to be from the Hollywood Beauty Awards 2018, where the Mirzapur actor met several Hollywood icons such as Britney Spears and Samuel L Jackson. He was also elected as an award presenter at the event. Sharing the picture from the awards, Ali Fazal captioned it: "#throwback to... aah well... not too long ago. Samuel L Jackson... Thank you for being an inspiring figure... always... to the next time we meet."

#throwback to aaah well not too long ago. @samuelljackson .. thank you for being an inspiring figure .. always.. to the next time we meet. I'll hound @alyx34 !!!

Ali Fazal gained recognition internationally after his Oscar-nominated Hollywood film Victoria And Abdul released in 2018. He co-starred with Judi Dench, Tim Pigott-Smith, Eddie Izzard and Olivia Williams. Based on a novel of the same name by Shrabani Basu, Victoria And Abdul showcases the strong friendship between Queen Victoria (played by Judi Dench) and her attendant Abdul Karim (played by Ali Fazal).

On the work front, Ali Fazal made his debut in Bollywood with a special appearance in Aamir Khan's 3 Idiots (2009). He went on to feature in Always Kabhi Kabhi, which released in 2011. His breakthrough film was Fukrey, in which he co-starred with girlfriend Richa Chaddha, Pulkit Samrat and Manjot Singh. His other films are Baat Ban Gayi, Bobby Jasoos, Sonali Cable, Khamoshiyan and Happy Bhag Jayegi. Ali Fazal was also a part of the 2015 American film Furious 7.