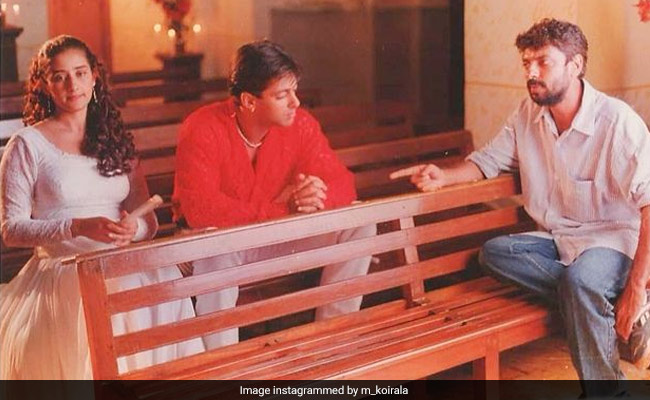 25 years before today, renowned filmmaker Sanjay Leela Bhansali's directorial debut Khamoshi, co-starring Manisha Koirala and Salman Khan, opened in theatres. The film marked the first chapter of Sanjay Leela Bhansali's journey as a director. As Khamoshi, which released on August 9 in 1996, clocked 25 years on Monday, Manisha Koirala posted her beautiful memories of the film on social media. Sharing a poster of the musical romantic drama along with a throwback photo featuring herself, Salman Khan and Sanjay Leela Bhansali, the actress wrote: "What is life without an impossible dream! This was a quote that brought us together! My dearest friend Sanjay Leela Bhansali, the #genius who started his career with my bestest film #khamoshi #25years ago...and dazzled all of us with repeated brilliance one film after another."

She added: "What a journey he has had, like many I too bow down to his passion for cinema...love you loads Sanjay..a huge congratulations on completing 25 years in #hindicinema and big thank you got showing us great cinema.... #25YearsOfSLB #25yearsofkhamoshi."

Earlier in the day, Deepika Padukone and Ranveer Singh, whose love story began on the sets of the director's 2013 film Goliyon Ki Rasleela Ram-Leela, also celebrated 25 years of Sanjay Leela Bhansali. Deepika and Ranveer, who got married on November 14 in 2018, went on to star in SLB's two more films together - Bajirao Mastani and Padmaavat.

While Ranveer Singh shared a montage of clips from Sanjay Leela Bhansali's films, Deepika wrote a heartwarming note for the director, an excerpt of which read: "I say this without a shadow of doubt that I wouldn't be half the person I am today if it wasn't for Sanjay Leela Bhansali." Deepika's debut film Om Shanti Om released on the same date when Sanjay Leela Bhansali's Saawariya, featuring Ranbir Kapoor and Sonam Kapoor, opened in theatres. Read Deepika Padukone's full pots here.