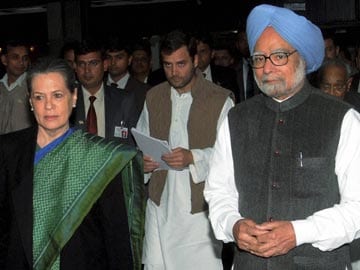 New Delhi: Lashing out at "rootless wonders and spineless creepers" for his party's plight, senior Congress leader Kishore Chandra Deo today said the Congress would not have come to such a pass if Rahul Gandhi had ensured the implementation of half the promises made after he became the vice president. (Congress Unchanged. Gandhis' Offer to Resign Rejected)

Mr Deo, an outgoing Union minister who lost in the recent Lok Sabha polls after being elected to the House for five terms, urged party President Sonia Gandhi and Rahul to introspect on how to "emancipate the Grand Old Party from the clutches of rootless wonders and spineless creepers, who have held sway for more than two decades and have brought the party to such a pass". (Digvijaya Wants Rahul Gandhi to be Leader of Congress in Lok Sabha)

In an interview to PTI, Mr Deo recalled that Rahul had said much at Jaipur after becoming the party's vice president on transformation of the organisation.

"If 50 per cent of it was decided by the party, this situation would not have arisen," he said.

Alleging that there was a "stranglehold" of one to two dozen people on the party and its leadership, Mr Deo made a strong pitch for Rahul, as also Priyanka Gandhi, to work to "free the Congress from these chains and shackles." (Amid Clamour for Priyanka, Rahul's Team Launches Defence)

The outgoing Tribal Affairs Minister said that there was a "crisis of credibility" as regards the Congress-led coalition in the wake of the price rise of essential commodities and corruption and scams. (Rahul Gandhi, Smiling, Says He Accepts Responsibility)

The party and the government failed to effectively counter the propaganda on the issues through their words and deeds, he said.

Making a serious accusation on the state of party affairs in Seemandhra, he alleged that the "Congress was politically mortgaged and sold out to Jagan, YSR Congress and its fifth column." (Congress' Milind Deora, Priya Dutt Appear to Criticize Leadership)

Alleging total mismanagement on the part of the party, Mr Deo said while the understanding of the political situation was "poor", the All India Congress Committee in-charge for the state also gave a "wrong briefing" to the Congress President.

He said that even notes sent by him on various issues to the party chief had "no effect at all".
Mr Deo said the general feeling was also negative.

"The general impression was that the Congress has conceded the plank of the party to the YSR Congress in the belief that Jagan Mohan Reddy could be managed or manipulated later. These things do not work out," he said.

He said in Seemandhra, the Congress had accepted defeat even before it fought the poll battle.

This, he said, led to the fielding of several weak candidates in many assembly segments and the funding from AICC was also "miserable".

As against this, there was no dearth of resources for the other two parties - Telugu Desam Party and the YSR Congress -- which also had well-oiled party machineries, he said, adding, "The writing was there on the wall."

The Congress could not secure a single seat in the Lok Sabha polls in Seemandhra and it fared poorly in the Assembly polls.

The Congress leader said that in Kerala and Karnataka, the Congress had "good" Chief Ministers and "they delivered results. Proof of the pudding is in the eating."

Promoted
Listen to the latest songs, only on JioSaavn.com
Of the total tally of 44 of the Congress in the Lok Sabha, Karnataka accounts for nine and Kerala accounts for eight seats.

Speaking generally of the party, he said it appeared that the party structure failed to provide proper feedback to the leadership.