Under the banner of DUTA, the teachers marched from Mandi House to the Parliament today. 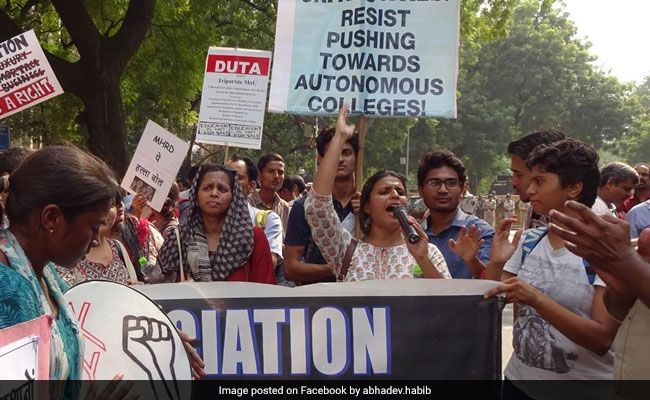 Hundreds of teachers and students marched today to protest the Central Government's Tripartite MoU and its failure to issue an Ordinance on the Reservation Roster that will help resume permanent appointments for the thousands of vacant teaching posts across Delhi University departments and colleges.

The DUTA or Delhi University Teachers Association said in a statement that it is opposing the Tripartite MoU because it asks the University and its colleges to generate resources through regular fee-hikes, increased enrollment and mobilise revenue from corporate sources, alumni and through self-financed courses.

"It also puts an end to UGC grants and forces the University to take infrastructure loans through HEFA. Additionally, it allows the MHRD to set absurd quantified targets for the qualitative assessment and learning outcomes of courses offered in the University," said the statement.

"This ill-conceived move," DUTA said that, "will have drastic adverse effects on Equity, Access and Quality in higher education".

The association also urged the Government to immediately withdraw the Tripartite MoU and allow a wider debate ways to strengthen higher education.

The DUTA has also said the Government's failure to honour its own promise of issuing an Ordinance on the Reservation Roster to enable universities to maintain status quo in appointments while the issue is being reviewed by the Supreme Court.

"The failure of the Government to issue an Ordinance has resulted in a freeze on the overdue process of permanent recruitment," said the statement.

The DUTA has urged the education ministry to release the revised allowances for teachers and non-teaching staff and revised pensions for all retired employees.

"Despite the notification of the 7th Pay Revision in November last year, the Government is still dragging its feet and delaying the payment of dues to teachers and other employees of universities and colleges. This neglect of higher education points towards the cynical indifference of the Union Government," it  said.

Under the banner of DUTA, the teachers marched from Mandi House to the Parliament today.