Scoring 171/170 Is Possible. An IAS Topper Did It In Harvard

Ankur Garg, a pass out of prestigious IIT Delhi, topped IAS exam at the age of 22 making him one of the youngest persons to clear IAS exam. Ankur Garg, is an IIT alumnus and a 2002 batch IAS officer.

"When I was in school, my father used to say - 10 out of 10 isn't good enough in any exam. Always strive for 11 out of 10," wrote Ankur Garg in a post on his Facebook profile. The post accompanies a picture of his score card in Macroeconomics signed by none other than Jeffrey Frankel, a leading International macroeconomist.

What was only a metaphor used by his father to denote excellence has finally been achieved by Ankur Garg who is an IIT alumnus and a 2002 batch IAS officer.

Dedicating his success to his father who always inspired him to strive for the best, Ankur Garg wrote in his Facebook post on December 22, "In the last phase (possibly!) of student life now, I end up getting this score (171 out of 170) in the final exam of the macroeconomics course. The icing on the cake - it comes at Harvard and is signed by Jeffrey Frankel himself!". 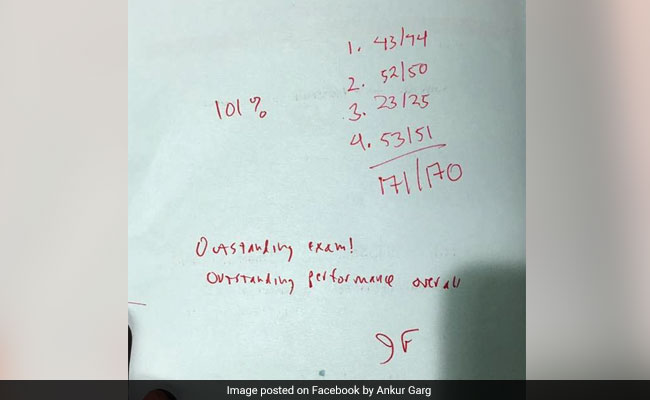 In the picture shared by Ankur Garg on Facebook one can easily see a tidily written '101%' in the left corner of the page which also contains the breakup of marks scored by him.

The exam was part of 'International Development' programme Mr Garg is currently pursuing at Harvard University.

Ankur Garg is no stranger to achievements and is a pass out of IIT Delhi, one of the most prestigious engineering institutes in the country. He also topped IAS exam at the age of 22 making him one of the youngest persons to clear IAS exam.

Scoring more than 100% is not an uncommon occurrence because of the extra credit opportunity in American education system. However, only the brightest in a batch happen to achieve this feat.