UGC has in last week invited applications for awarding 1,000 MANF scholarship for minority students for the academic year 2018-19 after an interval of 2 years. 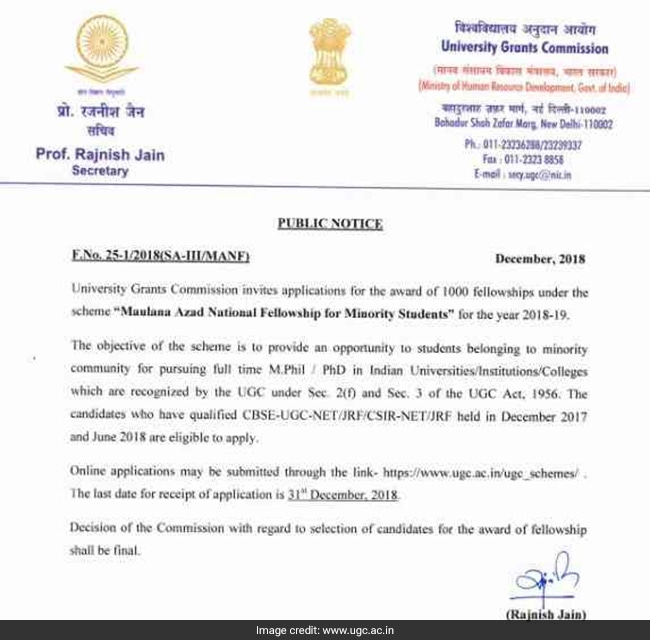 An earlier notification by UGC has fixed qualifying NET as criteria for MANF fellowship.

Latest UGC notification on research fellowships for minority candidates has run into trouble after several researchers and student organisations raised questions about the criteria advertised by the Commission. The researchers questioned the University Grants Commission or UGC's logic for making NET as criteria in general and its 'December 2017 and June 2018' exams in specific for the Maulana Azad National Fellowship (MANF) awards.

UGC, the higher education regulator, has in last week invited applications for awarding 1,000 MANF scholarship for minority students for the academic year 2018-19 after an interval of 2 years.

An earlier notification by the Commission has fixed qualifying National Eligibility Test (NET) as criteria for the fellowship.

"As per new notification, only those who qualified net in December 2017 and June 2018 only can apply. Many scholars who have qualified in earlier net exams will face trouble," Mr Nahas from Students Islamic Organisation said.

"What is the logic behind making UGC NET December 2017/June 2018 as the criteria to apply for the fellowship? What mistake has been done by those who had qualified it in the previous time?," a research scholar from Jawaharlal Nehru University who is planning to apply asked.

"Was there any difference in between the NET exams conducted during those times and the previous ones in terms of indicating candidates' merit?," he wondered.

Mr Nahas also added that the organisation will continue its struggle with its earlier demand of increasing the number of fellowships to 3,000 and the demand for dismantling the criteria of CBSE-UGC NET for MANF.

Another sub-criteria regarding NET clearance released by the Commission has also created confusion among applicants.

"The candidates who have qualified CBSE-UGC-NET/JRF/CSIR-NET/JRF held in December 2017 and June 2018 are eligible to apply," said the UGC notification released on Monday.

CSIR NET is conducted for the Science students while UGC NET is organised for the students belonging to Humanities background.

"How many competitive examinations I need to qualify before getting a scholarship from the government? I am a science researcher and I am here after qualifying GATE and JEST," said another applicant.

Another researcher complained about the time window provided for the applications. The applicants have been asked to submit the forms in twenty days' time.

"Why is there only a gap of 20 days for applying? That too, in the month of December, when students and faculties go for vacation and field works. In universities, to get signatures of supervisors, chairpersons, deans and registrars, it takes so many days," he asked.