The event is being supported by the Ministry of AYUSH and Department of Biotechnology among others. 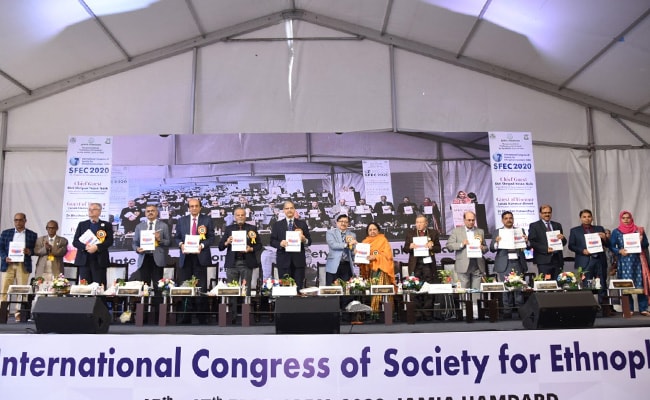 The 7th International Congress of the Society for Ethnopharmacology was organised at Jamia Hamdard.

The 7th International Congress of the Society for Ethnopharmacology (2020) was organised at Jamia Hamdard, New Delhi. This high level International Conference, perhaps the largest such gathering ever held in India, witnessed the presence of more than 60 renowned speakers and about 1,700 delegates from 43 countries, and about 40 eminent Indian speakers and about 1700 delegates from India.

The event is being supported by the Ministry of AYUSH and Department of Biotechnology among others.

"The Unani medicine itself has been as a syncretic science. It is Important to recognise the value of the scientific approach of Unani- that is diagnostic, prognostic and holistic, with a stated syncretic developmental approach. All sciences grow by interacting with and assimilating from other knowledges, but most do not actively acknowledge this," Dr Hasnain said.

Former DBT Secretary Dr. Manju Sharma was present and spoke on traditional medicines while Prof. Asim Ali Khan, Director General, Central Council for Research in Unani Medicine (CCRUM) stressed on the scientific validation of regional traditional medicines and their use in the world besides deliberating on their regulatory aspects.

The Congress concluded on February-17, 2020 and focussed on "Ethnopharmacology in development of scientifically validated quality products from medicinal plants and regulatory aspects" while highlighting the several crucial and contemporary issues of AYUSH (Ayurveda, Yoga, Unani, Siddha and Homeopathy) related to Ethnomedicine, Ethnopharmacology and Medicinal Plant Research and the Regulation-related aspects.

The event was an attempt to bring together eminent scientists, teachers, practitioners, researchers, manufacturers, traditional healers and students related to AYUSH, Traditional Medicine, Pharmacy and biological sciences from different corners of our country and abroad.

The platform gave an opportunity to India to showcase the potential of its AYUSH, medicinal plants at the global level.

Exhibitions of various herbal medicine manufacturing companies with various AYUSH clinics showcasing the Indian System of Medicine, was also organized, which was open for general public during all three days.

Many traditional healers from Jharkhand, MP, Kerala and Tamilnadu have also participated.