The Economic Survey 2019, tabled in Parliament today said the proportion of elementary school-going children, in the 5-14 age group, will witness significant declines. The Survey said many states need to pay greater attention to consolidating or merging schools to make them viable rather than building new ones, contrary to popular perception.

As of 2016, population in the 5-14 age-group, which roughly corresponds to the number of elementary school-going children, has already begun declining in India and across all major states except Jammu and Kashmir, the Survey says. 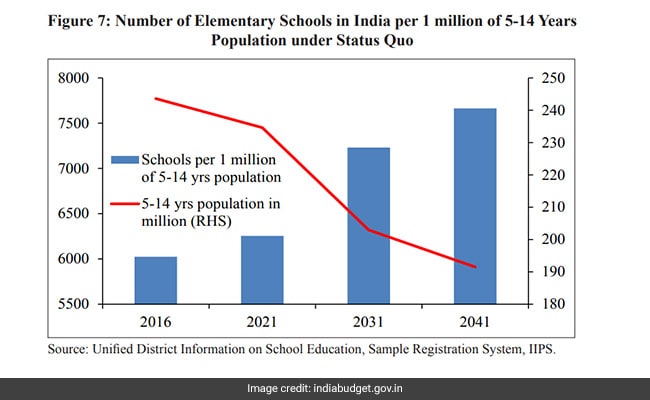 Number of elementary schools in India per 1 million of 5-14 years population under status quo.

Population projections suggest, it also said, that this trend will continue through 2041.

The size of the 5-14 years population will drop sharply in Himachal Pradesh, Uttarakhand, Tamil Nadu, Maharashtra, Punjab, Andhra Pradesh and Karnataka by 2041.

It will decline even in the laggard states such as Bihar, Uttar Pradesh, Rajasthan and Madhya Pradesh. 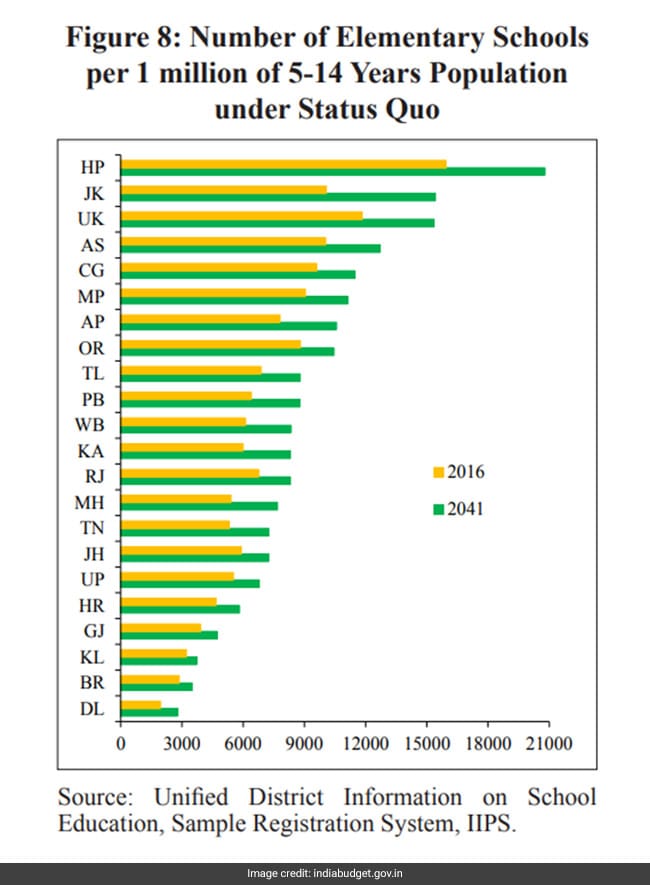 Number of elementary schools per 1 million of 5-14 years population under status quo.

"Overall, the number of school-going children in India will decline by 18.4 per cent between 2021 and 2041. This will have very important social and economic consequences," the Survey said.

In light of the projected decline in elementary school-going children, the number of schools per capita will rise significantly in India across all major states even if no more schools are added.

States such as Himachal Pradesh, Uttarakhand, Andhra Pradesh and Madhya Pradesh have more than 40 per cent of elementary schools with fewer than 50 students enrolled. Similar trends exist in Chhattisgarh, Assam and Odisha with large number of schools per capita and small school size.

"In fact, the number of elementary schools with less than 50 students has increased over the past decade across all major states except Delhi," the Survey said. 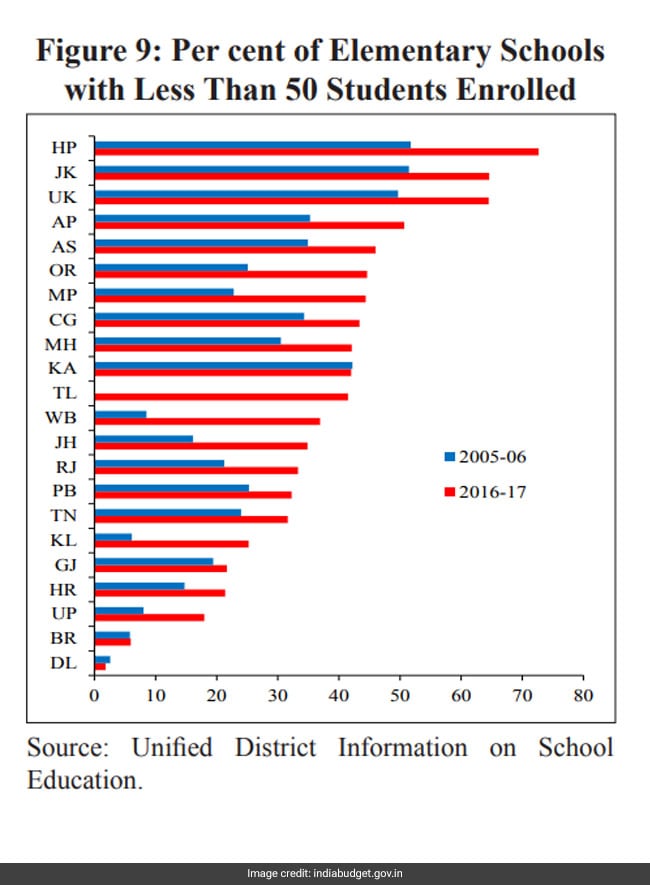 Per cent of elementary schools with less than 50 students enrolled.

"The time may soon come in many states to consolidate/merge elementary schools in order to keep them viable. Schools located within 1-3 kms radius of each other can be chosen for this purpose to ensure no significant change in access," it said.

"This would also be in line with the experience of other major economies witnessing a decline in elementary school-going population, such as Japan, China, South Korea, Singapore and Canada, which have implemented policies to merge or close down schools. Note that this is not about reducing investment in elementary education, but an argument for shifting policy emphasis from quantity towards quality and efficiency of education," it said.

Government Does Not Have Any Plans To Suspend NEET, Other Common Entrance Exams, Lok Sabha Told