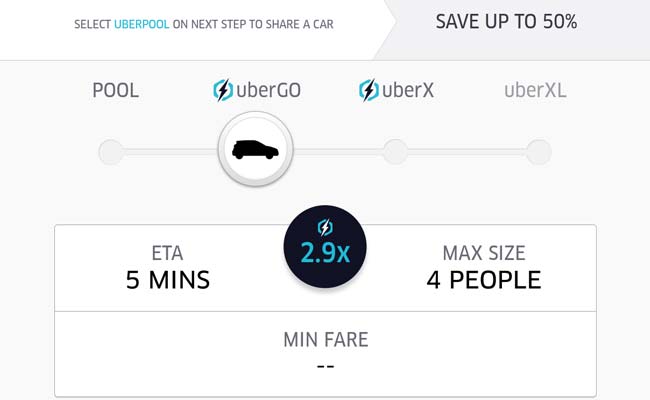 A screeshot of the Uber app at around 7 pm today shows 2.9 times surge on fares in Delhi.

New Delhi: Popular app-based cab aggregator Uber brought back surge pricing today, the first day of ban on diesel cabs in Delhi. The company's move has invoked the ire of Chief Minister Arvind Kejriwal who has warned of "strong action".

"Some taxis hv started charging surge. Surge not allowed under law. They r warned that strong action will be taken against them," Mr Kejriwal tweeted. (sic)

Mr Kejriwal, during the odd-even rule last month, had asserted that such demand-linked hikes on cab services are to be banned permanently. But just a day after the second phase of car rationing scheme to curb pollution was over, commuters across the city today complained of the fare hikes by Uber.

When contacted, an Uber spokesperson confirmed the development saying that suspension of surge pricing was only a "temporary" measure.

A senior Delhi government official said that action will be taken against these companies based on complaints. "We will impound their cabs," the official said.

Ola, another app-based cab provider, displayed a message on its app saying peak time charges may be applicable during high demand hours and will be conveyed during the booking which "enables us to make more cabs available to you". However, Ola displayed the disclaimer during the odd-even period as well, which although it did not invoke peak-pricing till yesterday.

The Delhi government had cracked its whip on cab service providers on the first week of the second phase of odd-even after Mr Kejriwal termed the concept as "daylight robbery". Authorities had also impounded cabs for overpricing.