Thousands of farmers from across the country converged at the Delhi's Ramlila Ground on Thursday after journeys that took some as long as 36 hours to complete, to press for their demands, including debt relief and remunerative prices for their produce. 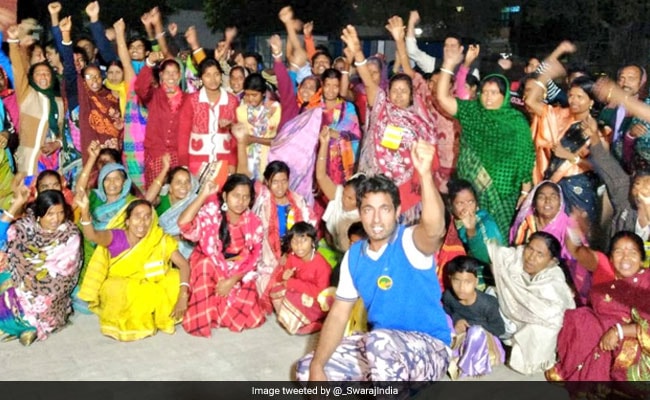 It was past midnight and a group of farmers were raising chants of 'Jai Jawan, Jai Kisan' while a few volunteers were offering tea to other protesters at Delhi's Ramlila Maidan to beat the cold.

Thousands of farmers from across the country converged at the Delhi's Ramlila Ground on Thursday after journeys that took some as long as 36 hours to complete, to press for their demands, including debt relief and remunerative prices for their produce.

They spent the night at the ground and will march to Parliament and Jantar Mantar today.

Kartar Singh, 50, a sugarcane farmer from UP's Sambal district was anxious about the march. He stayed up all night waiting to continue the protest this morning. "We have not come here to sleep. Farmers have converged in Delhi to remind the government that the party leading it had made promises of waiving off loans in its manifesto. And, its been four and a half years since they came to power," he said, with an edge of anger in his voice.

Mr Singh, a father of two, is from Fatehpur Sarai village in Sambal. His younger son, 22, has taken the field work while he is away. "My wife and children have told me, that I should fight and stay even for a week in Delhi, if needed," he told news agency PTI.

Inside the tents, farmers, both men and women, from all parts of India tried to get some sleep on a chilly night, ahead of today's big protest. Many who couldn't sleep sat huddled together, discussing the next strategy and family issues.

But, a group of volunteers, belonging to welfare organisation 'Khudai Khidmatgar' tried to offer some comfort to the farmers in the cold weather.

Shahjeb Jamal, a civil engineering student at Jamia Islamia and a volunteer with the group lugged around a steel container and handed out paper cups to farmers. "Our organisation's philosophy as envisioned by its founder Khan Abdul Ghaffar Khan, is service and public harmony, and so we are here. We Stand with the farmers," he said.

Mr Jamal said that another batch of volunteers will come and offer tea and some breakfast to them today.

A group of 25 to 30 doctors also offered medical aid till about 11 pm, some of them took off from work to volunteer.

Rashid, a junior resident at AIIMS was among the doctor's volunteers who attended to people last night. "I took an off from work, as I had to be here. They feed us, and we are not doing any favour by helping them, we are serving them," he told news agency PTI.

Doctors also came from Rohtak, Chandigarh and Aligarh Muslim University. Many were also from hospitals in Delhi.

"One person had fainted, so, after first aid, we sent him to LNJP Hospital," said Mahtab Alam, a doctor at a Delhi government hospital.