Coronavirus lockdown: These incidents are just a few among the many cases of desperation of workers as they battle hunger while the country remains in lockdown 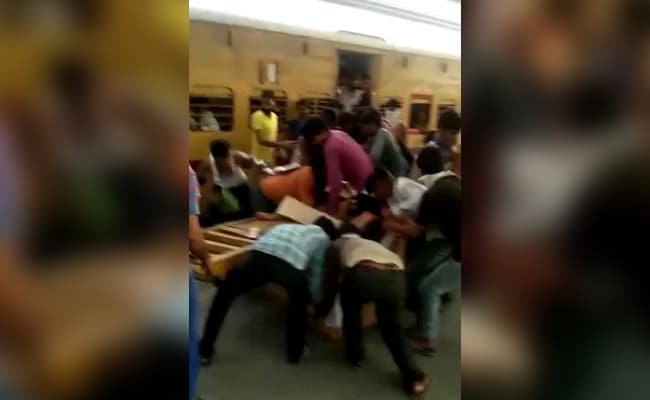 The coronavirus crisis that has left thousands unemployed, homeless and hungry is painting a raw picture of what desperation can look like when hunger is the drive. A push-cart with cartons of food and water is stopped and looted by scores of migrant workers who then start fleeing, videos from the Old Delhi railway station show. This incident happened on Friday.

The cart, with four cartons of snacks -- possibly chips, biscuits and other packed products -- and water bottles was stopped at the platform by a couple of men and within minutes a crowd swarmed to gather what they could get their hands on.

The migrant workers carried as much as they could and fled from the spot immediately. There was chaos and the workers scrambled for the packets, even snatching from each other, before leaving the spot. There were no Railway Police Officers around to intervene and restore order.

Only Shramik Special trains for migrant workers are operational from the Old Delhi station to ferry stranded labourers home.

These incidents are just a few among the many cases of desperation of workers as they battle hunger while the country remains in lockdown to slow the spread of the novel coronavirus.

Migrant workers are doing just about anything to feed themselves and their families. From scavenging at crematoriums to collecting milk spilled on the road, their helplessness is heartbreaking. Many have died trying to walk hundreds of kilometres back home when all public transport was stopped.

Migrant labourers have complained of shortage of food, unhygienic conditions of travel on their journeys back home. On Friday, migrant workers protested in Uttar Pradesh along their route back home by blocking railway tracks and demanding accountability as they complained of long delays and rotten food on board.

Earlier this month, migrant workers abused and violently fought with each other inside a train that had stopped in Madhya Pradesh's Satna over shortage of food.