Asking a gathering of Imams to be wary of division of votes, Arvind Kejriwal said it would help the Bharatiya Janata Party (BJP) win all the seven seats in Delhi. 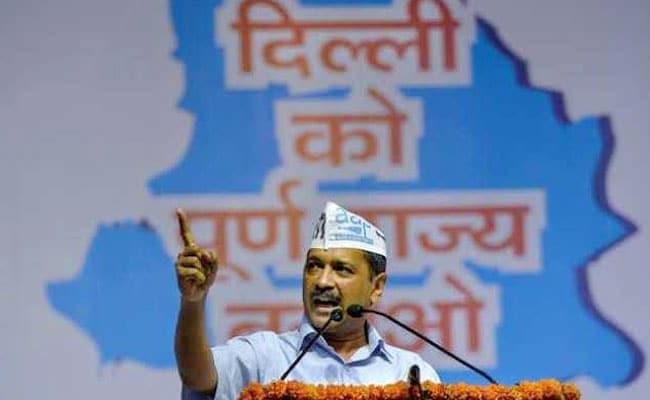 Attending a gathering of Imams of mosques in the city, Chief Minister Arvind Kejriwal on Wednesday warned against division of votes in the upcoming Lok Sabha polls in Delhi and claimed that the Congress would not win a single seat in the national capital.

At the event hosted by the Delhi Waqf Board, its chairman and Aam Aadmi Party (AAP) MLA Amanatullah Khan said the hike in the salaries of the Imams and Muajjins (mosque staff who give the prayer call) of the 200-odd mosques under the board will be implemented from February.

He added that the salaries of the Imams and Muajjins of 1,500 other mosques in the city would also be increased.

Urging the Imams to support the AAP, Mr Khan said, "People are saying they will vote for the Congress because the next prime minister will be from that party. If that is indeed so, we will also extend support to the Congress, but in Delhi, only the AAP can defeat the BJP, not the Congress."

Mr Kejriwal said, "If I felt the Congress could win, the AAP would give them all the seven seats (in Delhi) and leave the contest in their favour. The Congress cannot win even a single seat in Delhi."

Asking the gathering to be wary of division of votes, he said it would help the Bharatiya Janata Party (BJP) win all the seven seats in Delhi.

"If your votes are divided, the country will suffer immensely," the chief minister said.

Explaining the "vote mathematics" to the Imams,Mr Kejriwal pointed out that in the 2014 Lok Sabha polls, the BJP had won all the seven seats in Delhi by polling 46 per cent votes, whereas the AAP had got 33 per cent and the Congress 15 per cent votes.

"It is being said that the BJP is going to lose 10 per cent votes. If these votes go to the Congress, the BJP will win again. But if the AAP gets these votes, we will bag the seven seats," he said.

The AAP chief also told the gathering that there was no need to bother about who would become the next prime minister.

"The TV channels are showing the polls as a contest between (Congress chief) Rahul Gandhi and (Prime Minister) Narendra Modi. Do not get confused by it because it is a misconception.

Just as the Samajwadi Party (SP) and the Bahujan Samaj Party (BSP) in Uttar Pradesh, Mamata Banerjee in West Bengal and K Chandrashekar Rao in Telangana could defeat the BJP in their respective states, the AAP could also defeat the BJP in the national capital, Mr Kejriwal said.

"If Modi and (BJP chief Amit) Shah return in 2019, the country and the Constitution will be endangered. They will break the country like Hitler," he added.

The AAP national convener also accused the BJP and the Rashtriya Swayamsevak Sangh (RSS) of meeting the locals at the parks of the city and attempting to shift the "anti-Modi" votes to the Congress.

"They apparently speak against Modi, saying even the Congress was better than him. It is a ploy to shift votes to the Congress and if that happens, the BJP will win the Lok Sabha polls," he said.

Delhi ministers Imran Hussain and Kailash Gahlot also urged the gathering to ensure the AAP''s victory in the national capital in the upcoming parliamentary polls.