Soon after the JNU students began their protest during the minister's address, a group from the ABVP, the student body linked to the ruling BJP, held a counter-protest, raising slogans in favour of the government's Article 370 move. 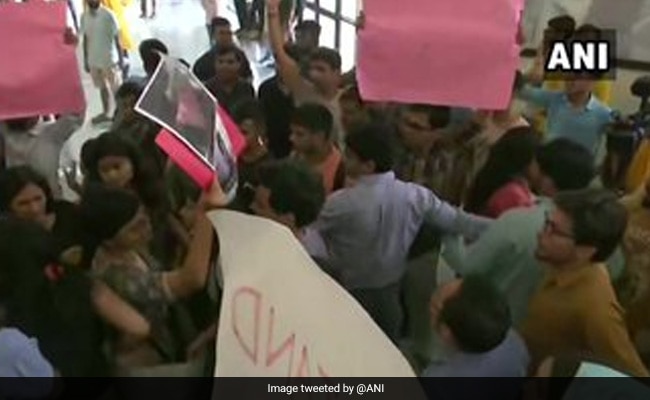 A group of students at the Jawaharlal Nehru University on Thursday raised slogans against Union Minister Jitendra Singh, who was on campus to address a seminar on the government's decision to revoke Jammu and Kashmir's special status under Article 370.

Soon after the students began their protest during the minister's address, a group from the ABVP (Akhil Bharatiya Vidyarthi Parishad), the student body linked to the ruling BJP, held a counter-protest, raising slogans in favour of the government's move. "Kashmir se Kanyakumari, Bharat Mata ek Hamari (From Kashmir to Kanyakumar, Mother India is one)," said the ABVP activists.

Activists of the Left-wing AISA (All India Students Association), on the other hand, raised slogans against the minister, and demanded that the centre restore Jammu and Kashmir's special status.

The two groups were reportedly engaged in a scuffle at the campus' Convention Centre where the seminar, titled "Abrogation of Article 370: Peace, Stability and Development in Jammu, Kashmir and Ladakh", was held.

Glimpses of "One Constitution" Lecture on #Article370 at Jawaharlal Nehru University (JNU), #NewDelhi . Rousing enthusiasm witnessed from all shades of opinion. pic.twitter.com/vWEWw9ofsM

The Left-controlled JNU Student Union had, in a strongly-worded statement, condemned the university administration's decision to invite the minister and the government's move on Article 370.

"Today marks the 60th day of the communication blockade and information gag in Jammu and Kashmir... The JNUSU condemns in the harshest possible terms this communication gag," the student union said in statement.

"The JNUSU also condemns this vulgar display of triumphalism on our campus. This campus and its students, teachers and Karmacharis are rock solid in unity with the people of Kashmir and condemn the trampling of constitutional values and democracy in Kashmir," it said.