While the driver was fined Rs 1.31 lakh for overloading and other traffic violations, the owner was asked to cough up Rs 69,500 as penalty. 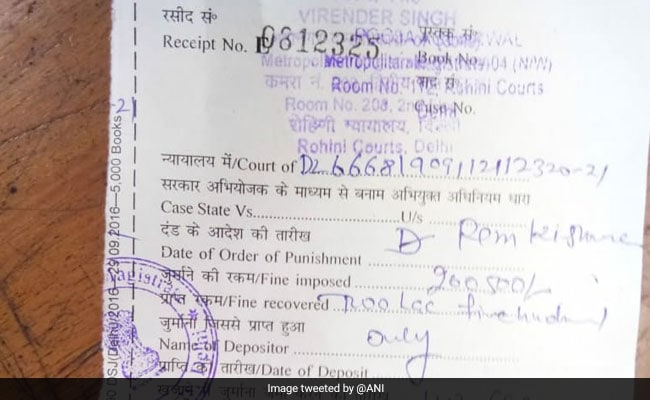 The truck-- which is registered in Haryana-- was fined at the GT Karnal Road on Wednesday.

The driver and owner of a truck have been fined a whopping Rs 2 lakh in Delhi for multiple violations under a traffic law amended by the centre earlier this year.

While the driver was fined Rs 1.31 lakh for overloading and other traffic violations, the owner was asked to cough up Rs 69,500 as penalty. This is the highest fine reported so far ever since the stringent traffic rules came into effect on September 1.

The truck-- which is registered in Haryana-- was fined at the GT Karnal Road on Wednesday.

The total amount was paid by the owner of the truck, news agency PTI reported.

This comes days after a truck owner had to pay Rs 1,41,000 in Rajasthan for violating several traffic rules. Another truck driver in Odisha was fined over Rs 80,000 earlier this week.

The implementation of new rules has created a furore across the nation, with political parties slamming the centre for introducing the hefty fines.

A number of states have chosen not to implement the centre's rules. States such as Madhya Pradesh, Kerala and Delhi-- ruled by the opposition-- have hinted that they may not impose the fines.

West Bengal Chief Minister Mamata Banerjee has flatly rejected any possibility of the people in her state being forced to cough up such "harsh" penalties.

BJP-ruled states such as Gujarat, Maharashtra, Goa and Karnataka have also announced that they will not impose the fines.

Talking to NDTV on Wednesday, Union Transport Minister Nitin Gadkari justified the fines, saying they were imposed to save lives lost every year in road accidents.

"It's time that the country thinks about saving lives...1,50,000 people get killed on the roads in a year and 65 per cent of them are 18-35 years old. They haven't been killed in terror strikes or riots.. This (the new law), was done to save lives. That is my first objective, but I need the cooperation of state governments. This should be above parties and state governments."

States will be responsible if they try to dilute traffic violation fines, he added.