Delhi Rain: The downpour has also resulted in crawling traffic, with many on the road as Durga Puja festivities have begun. 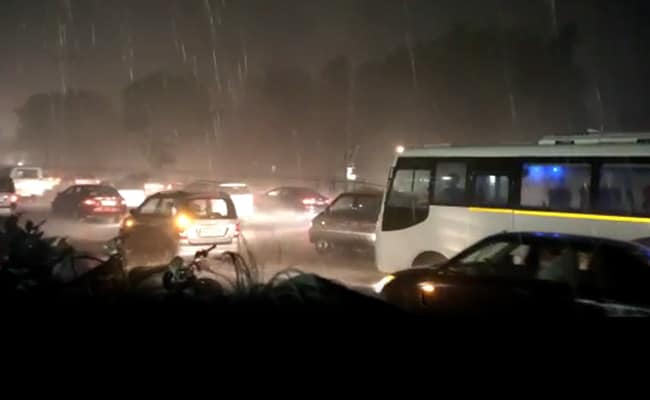 Heavy rain has hit Delhi, resulting in operations at the city airport being suspended for nearly half an hour this evening.

The downpour has also resulted in crawling traffic, with many on the road as Durga Puja festivities have begun.

Vistara Airlines too cautioned that the rain might hit arrivals and departures at the Delhi airport.

#TravelUpdate Due to heavy rain in Delhi, arrivals/departures from Delhi may be impacted. Please visit https://t.co/IZ9taSJiWX or SMS UK <flight no>to 9289228888 for updated flight status.

The rain also brought down the temperature. Delighted and surprised, citizens took to Twitter to share pictures and videos of the rain.

"No predictions, no warnings. There you have it, the unpredictable mother nature," one Twitter user wrote.

This season, Delhi received its lowest rainfall since 2014, the weather office said on Wednesday.

12-Year-Old Among 3 Run Over By Speeding Bus In Delhi: Police