Gautam Gambhi tweeted, "This is not Tughlaq's Delhi of the 14th century but of 21st century Tughlaq" 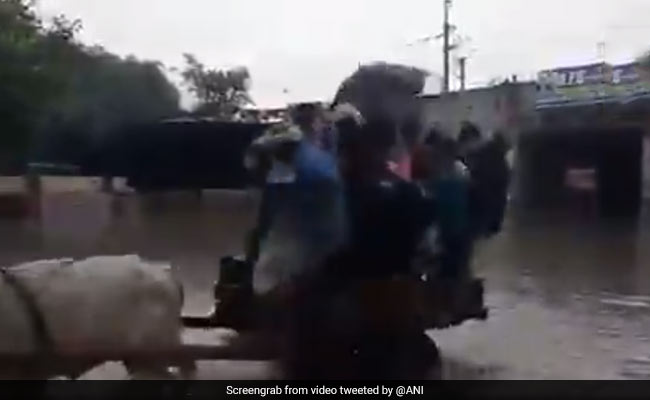 As the overnight rain led to flooding in several parts of Delhi on Thursday, throwing traffic out of gear, BJP MP Gautam Gambhir tweeted a video of people crossing a severely flooded road on a bullock cart in what appeared to be a potshot at the Arvind Kejriwal government.

"This is not Tughlaq's Delhi of the 14th century but of 21st century Tughlaq," tweeted Mr Gambhir in Hindi.

The video orginally shared by news agency ANI shows people on a bullock cart navigating through a severely flooded road. Within seconds, at least five people fall into the water one after the other after they lose balance. The incident, according to ANI, took place in the Tughlakabad area, one of the worst-affected parts of the national capital.

The Delhi BJP MP's tweet came on a day Delhi witnessed the heaviest spell of rains this monsoon season.

According to the India Meteorological Department (IMD), the Ayanagar weather station recorded 99.2 mm rainfall, the maximum in the city, during the 24-hour period ending at 8.30 AM on Thursday. The Palam and Ridge weather stations gauged 93.6 mm and 84.6 mm precipitation respectively.

The Safdarjung observatory, which provides representative figures for the city, recorded 68 mm rainfall, according to the IMD.

Vehicles moved bumper to bumper during the morning rush hours, as the downpour led to flooding in key road stretches.

Pictures and videos of vehicles and people wading through waist-deep water were widely shared on social media platforms. In Tughlakabad, police officials were forced to abandon their PCR van in the waist-deep water at an underpass there.

The downpour has however brought down the rain deficiency in the national capital.

Till Wednesday evening, the Safdarjung observatory had recorded 72 per cent less rainfall than normal in August, the lowest in 10 years, according to the IMD. The shortage reduced to 14 per cent by Thursday morning.

Overall, Delhi has recorded seven per cent more rains than normal in the monsoon season so far.

The weather office has warned of more rainfall during the day.