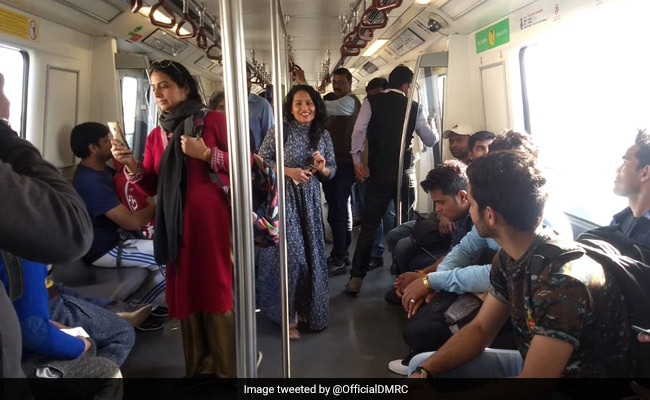 The Delhi Metro has sent a report on free rides to women to the AAP government, seeking at least eight months' time to make necessary preparations, including seeking approval from the fare-fixation committee, Chief Minister Arvind Kejriwal said Wednesday.

He said the report received by his government from Delhi Metro Rail Corporation (DMRC) has cited an annual requirement of Rs 1566.64 crore to fund the fare exemption.

Addressing a press conference, Mr Kejriwal said the fare fixation committee's approval was just a "formality" and rejected the apprehension that it could be a "roadblock" before his government's ambitious scheme.

The fare-fixation committee formed by the Centre for Delhi Metro's fare-related decisions may take time to set up. Since the inception of the Delhi Metro in 1995, only four such committees have been formed, officials said.

Headed by a serving or retired high court judge the committee comprises chief secretary of the Delhi government and officials of the Housing and Urban Affairs Ministry.

The Delhi Metro in its report gave two options for the implementation of the scheme. Under one, pink tokens will be given to women and it will take eight months to implement. Under the other, tokens and cards will be provided, but this option will take at least one year to implement, he said.

The chief minister said his government will talk to the DMRC to implement the scheme in under eight months.

"We will seek break up of the eight months' time cited by the DMRC from its officials because it should not take this much time. It only requires to re-open its token counters that have been closed and arrange for (pink) tokens to be provided to women commuters," he said.

The proposal of the AAP government to exempt women from fare in public transport buses and metro trains is being seen as a major sop before the assembly polls due early 2020.

The Delhi Transport Corporation (DTC) which runs around 3,900 buses has already submitted its proposal. The government will provide subsidy to the public transporters under the proposed scheme.

Mr Kejriwal said the free ride scheme will lead to a 50 per cent jump in the number of female commuters. Currently women comprise 30 per cent of daily ridership of the metro trains.

The chief minister said that the DMRC report sought "commitment" by the Delhi government for running the scheme which it was ready to extend.

He said the move should not be seen as against gender equality.

"Those men opposing it should consider that women who may be their mothers, wives and daughters will benefit from it and it will cut down their monthly travel bill."

Free ride in public transport will not only ensure their safety but also empower them and open doors for opportunities before them, he said.

Allowing free rides to women in public transport is a "win-win situation" for all, including the Centre and the Delhi government, he added.