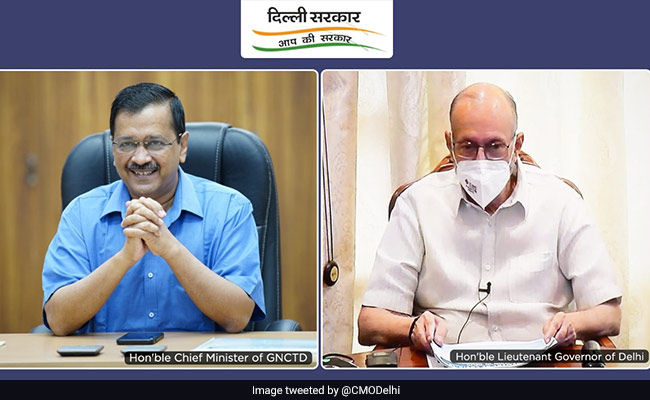 Delhi Lieutenant Governor Anil Baijal and Chief Minister Arvind Kejriwal held a meeting today to discuss the roadmap and an action plan to tackle a possible third wave of COVID-19 infection in the national capital.

A state-level task force, more healthcare staff and a special task force for treatment of children are part of the Delhi government''s action plan to deal with the third wave, the Chief Minister's Office tweeted.

During the meeting, the Lt Governor and the chief minister also discussed bed and oxygen management, availability of drugs and COVID-19 vaccination, the Chief Minister's Office said.

The Delhi government will train 5,000 youths to assist doctors and nurses as part of preparations for a possible third wave. The health assistants or community nursing assistants will be imparted a two-week basic training in nursing and lifecare that will start from June 28 in batches of 500 candidates.

In May, the Delhi government had set up a 13-member committee to prepare an action plan for a third wave of COVID-19 after assessing the current status and projected requirement of the health infrastructure such as hospitals, oxygen plants and drug supplies in the city.

Another eight-member expert committee was set up to devise a strategy for mitigation and management of the third wave of COVID-19.

Mr Kejriwal had earlier said his government has made preparation for around 37,000 cases a day which is expected at the peak of the third wave.

A paediatric task force has been set up to give suggestions on protecting children during the third wave. Two genome sequencing labs, to identify variants of the virus, are coming up at the Lok Nayak Jai Prakash Hospital and the Institute of Liver and Biliary Sciences (ILBS) in Delhi.

The Delhi government is also working on creating a buffer stock of important medicines.

Rains In Parts Of Delhi Brings Relief From Heat