Coronavirus: The total number of positive COVID-19 cases in Delhi is 1,176. Till now, 27 people have been cured and discharged, while 24 deaths have been reported in the national capital. 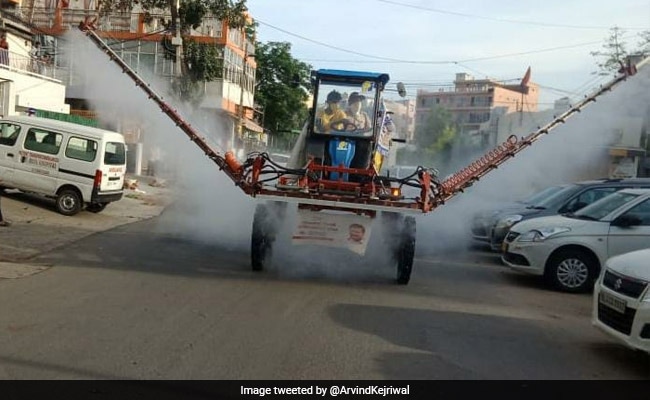 The Japanese machines can be adjusted according to the available space, said AAP's Raghav Chadha

"These machines from Japan are very flexible as its length is adjustable, and therefore, can easily enter narrow lanes. Ppm sodium hypochlorite solution has been used for the sanitisation drive," the Rajinder Nagar MLA was quoted by news agency ANI as saying.

According to the World Health Organisation's (WHO) sanitisation guideline, sodium hypochlorite at 0.5% (equivalent to 5000 ppm) is recommended for disinfecting surfaces. The guideline says that effective inactivation of the highly contagious coronavirus could be achieved within a minute using sodium hypochlorite, a common disinfectant.

The Delhi Chief Minister announced the massive sanitisation drive under the "Operation SHIELD" after the containment zones in the national capital rose to 43 on Sunday.

The expansion of SHIELD is ''S'' for Sealing of localities, ''H'' for Home quarantine, ''I'' for Isolation and tracing, ''E'' for Essential supplies, ''L'' for to Local sanitisation, and ''D'' for Door-to-Door checking.

The operation has been a success in north east Delhi's Dilshad Garden, where no new case of COVID-19 has been reported in the last 10 days. Dilshad Garden had earlier been declared a hotspot.

The total number of positive COVID-19 cases in Delhi is 1,176. Till now, 27 people have been cured and discharged, while 24 deaths have been reported in the national capital.