Addressing a public rally, Arvind Kejriwal said his government and ministers had to struggle for three years to bring the project to fruition. 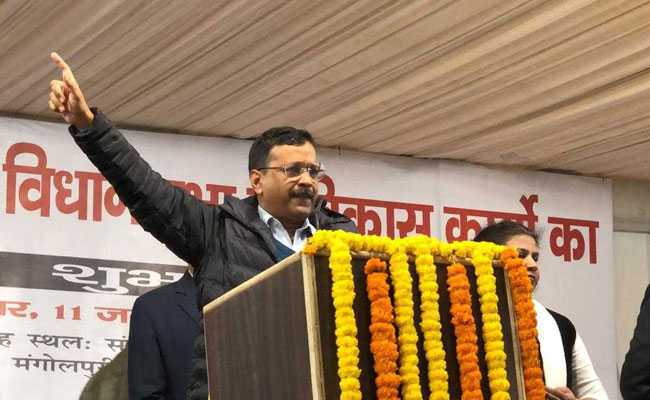 Arvind Kejriwal said people should vote for AAP in the Lok Sabha and not for any other party. (File)

Delhi Chief Minister Arvind Kejriwal on Wednesday said the CCTV camera installation across the national capital -- a flagship programme of the Aam Aadmi Party -- has begun in various parts of the city.

Addressing a public rally, he said his government and ministers had to struggle for three years to bring the project to fruition.

He attacked the central government for restricting the work done by the Delhi government and for "harassing" the AAP.

"The work of installing CCTV cameras has begun," he said at an inaugural function of development works at Wazirpur.

He said people should vote for AAP in the Lok Sabha and not for any other party thinking about who will be the PM.

"Last time you voted for Modi, thinking he will work for you after becoming the PM. But what has he done for you? Don't vote for Rahul Gandhi or Modi. Vote for AAP," he said.

In another rally at Model Town, the AAP Chief said if Delhi was granted full statehood, the police will be held answerable to public.

"After the city becomes a full state, the police will report to the public. If given to the elected government, we will ensure that either they listen to you or the SHO will be transferred."

"Police will be forced to listen to the people. After given full statehood, we will ensure that women can walk freely without any fear even at 11 pm"

He said his government will not have to seek permission from the centre for working for Delhi, if it becomes a full state.

Mr Kejriwal promised that once Delhi became a full state, 85 per cent of seats in all colleges will be reserved for the Delhi students and the same number of seats will also be reserved in jobs for Delhi residents.

"Immediately after the city is granted full statehood, we will issue notifications for about two lakh jobs."

He also promised home for all in 10 years after the city is granted full statehood.