The government has responded to hundreds of posts on social media complaining about massive congestion at Delhi's Indira Gandhi International Airport, or IGIA. For a start, queue management personnel have been actively reminding passengers on getting their identity documents and boarding passes ready for checking, and also guiding them towards shorter queues whenever possible, officials said.

Today, airport personnel were seen asking passengers to keep identity papers and boarding passes in their hands well in advance for faster checking and movement.

Additionally, the airport has posted messages on social media informing people how to make check-ins faster and has put up signage at queue-starting points to ensure order. 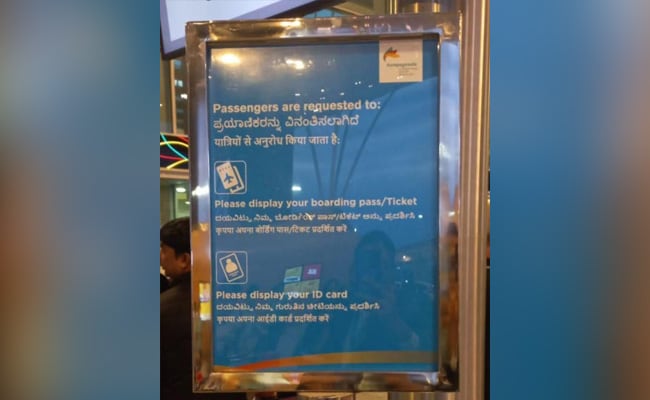 Hundreds of people have tweeted photo and videos showing long queues and massive congestion at Delhi airport. Some people, mostly frequent flyers, have alleged they have been going through chaotic scenes at Delhi airport for the past few months, and that it is not a recent problem.

"As usual, total chaos at Delhi Airport entry point. CISF making sure you spend 15-20 minutes just to get into the terminal event at 7:15 am. And what happens at immigration/security? Well, let's find out, but I don't think it's going to be easy," auto journalist Ishan Raghava tweeted this morning.

The chaos at @DelhiAirport continues. After 50 minutes for immigration, now in the security queue. Already spent 1 hour 15 minutes just trying to get through the terminal. Great job @JM_Scindia@AAI_Officialpic.twitter.com/hShd56aYJ9

"The chaos at Delhi Airport continues. After 50 minutes for immigration, now in the security queue. Already spent 1 hour 15 minutes just trying to get through the terminal..." Mr Raghav tweeted, tagging the authorities including Mr Scindia.

The Central Industrial Security Force, or CISF, handles security at Delhi airport. The passenger footfall is also high as the time around the New Year is a busy season, with people going on holidays.

"Delhi airport queues have no queue discipline. There is not a soul here who cares or here to help organise smooth flow of passengers. Airlines should advise passengers to come 4 hours before a domestic flight. There is panic, anxiety on each face," a passenger, Shivam Kamani, tweeted.

"We have been in line for almost an hour and still there is no respite...CISF needs to increase counters and GMR Delhi airport is becoming worse than ISBT. At least 100 people will miss their flights today," another passenger, Kit Walkar, tweeted, referring to Inter-State Bus Terminal, or ISBT.

Dear @JM_Scindia we have been in line for almost an hour and still there is no respite…
CISF needs to increase counters and GMR Delhi airport is becoming worse than ISBT. At least 100 people will miss their flights today… @PMOIndiapic.twitter.com/jkzn7N5svW

Later in the evening, some passengers tweeted the situation seems to have improved as airport personnel were seen interacting with passengers on ensuring queue discipline.

After yesterday's meeting, Mr Scindia had tweeted the steps they would take to ease congestion at airports.

The following initiatives were outlined-

1. Plans for peak-hour capacity-based on passenger processing capacity at each major airport

2. Landing cards to be distributed on board & filled up prior to arrival, so as to minimise queues at immigration counters.

"Held a detailed discussion with heads of all major Indian airports...and immigration officials on capacities deployed and those required at every point to process domestic and international passengers smoothly through the peak travel season," Mr Scindia tweeted.