The event "Awam ki Awaz" was held at Garden of Five Senses, near south Delhi's Saket at 6:30pm and was attended by hundreds including Arvind Kejriwal, Manish Sisodia and CPI-M head Sitaram Yechury. 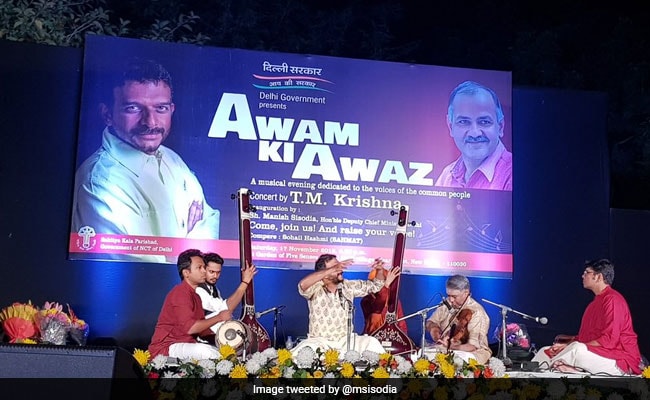 Carnatic singer TM Krishna, whose performance was "postponed" from the festival "Music in the Park", finally entertained his fans in Delhi, a day after with help from the Aam Aadmi Party government. The singer has been facing threats from right-wing elements on social media for his Carnatic compositions on Jesus Christ and Allah.

The event "Awam ki Awaz" was held at Garden of Five Senses, near south Delhi's Saket at 6:30pm and was attended by hundreds including Arvind Kejriwal, Manish Sisodia and CPI-M head Sitaram Yechury.

Refusing to speak much, Mr Krishna, before the performance, said: "The spirit of the day has transformed over the few days and keeping with the spirit, I will try and see if we can see multiple voices, languages, traditions, religion in the concert. I will not speak much."

Awesome performance by @tmkrishna
..and amazing response by people of Delhi . Superb!

Thanks Delhi! For being here. It's not only about music... Your presence here is a political statement to save the diversity of the country. pic.twitter.com/O07d6brqHJ

Due to the threats by right-wing groups, the sponsors for the last event, Airports Authority of India and SPIC MACAY, a non-profit organisation for classical music backed out and postponed his concert scheduled today.

Manish Sisodia, Deputy Chief Minister of Delhi who is also the Culture Minister, stepped in and invited the singer to perform in Delhi.

"No artist should ever be denied an opportunity to perform. I have invited TM Krishna to perform on November 17 for the people of Delhi. It's important to maintain the dignity of the art and artists," Mr Sisodia said.

Aviation body AAI's Chairman Guruprasad Mohapatra said they postponed the event due to "urgent circumstances", and gave no further details.