No action has been taken on the complaint against Saurabh Jha. The police said Vikas, the man who was beaten up, has several cases against him 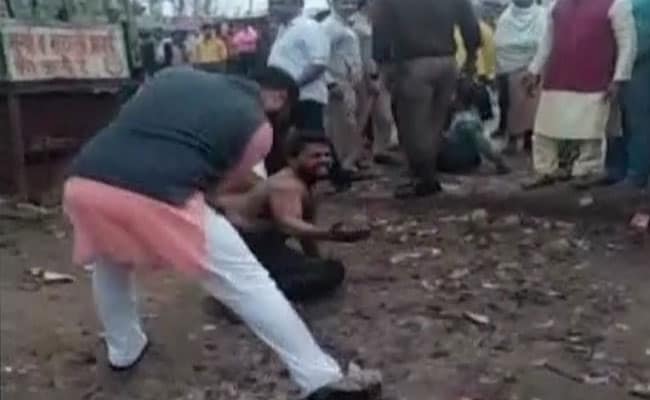 An Aam Aadmi Party legislator's aide was caught on camera thrashing a man near a busy road in Delhi. Policemen can be seen standing by the side, watching helplessly as Saurabh Jha, the aide, uses a police baton to beat him.

The video of incident, which took place on November 14, shows a shirtless man sitting on a marshy land by a busy road in outer Delhi's Kirari. He can be seen pleading before Saurabh Jha, who works for the AAP's Poorvanchal Morcha and an aide of Kirari legislator Rituraj Jha, as he continues thrashing him with the baton. A policeman can be seen requesting the worker to stop while two others are standing in a corner.

The police said Vikas, the man who was beaten up, has several cases against him. On November 14, he and his friends molested a woman and were beaten up by locals, the police said.

On seeing police, Vikas and his friends ran away from the spot. As they chased him, "a mob of 40 to 50 people" caught Vikas and thrashed him, the police said.

He was rescued by the police later and arrested.

Vikas' brother was named in a gang-rape case two years ago. According to their family, their mother had approached Saurabh Jha to help her son get through the case. The family alleges that Mr Jha demanded Rs. 25 lakh to "settle" the case. The family said he was furious when they refused to pay up and hence, thrashed Vikas.

No action has been taken on the family's complaint against Saurabh Jha.