The video of the incident, which surfaced on the Internet on Friday, shows the forest officials trying to capture the leopard by slowly dragging the cage towards it. 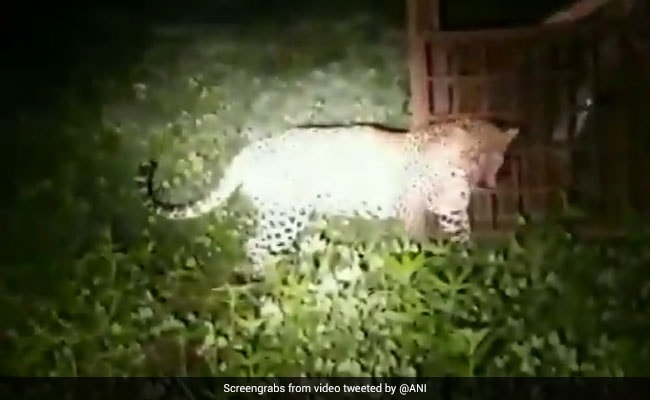 According to a forest official, the animal was injured during a fight with another leopard.

In the dead of the night, a badly injured leopard walks slowly in the jungle. Two brave forest rangers, with a heavy metal cage, make their way close to the big cat, just inching forward, one step at a time, hoping to catch it. All this, captured on a camera by another ranger who shines a bright flashlight on the leopard.

The 20-second chilling video shows the leopard walk in circles as the rangers close in. They almost get the leopard in the cage, before it goes and sits next to a tree.

#WATCH Madhya Pradesh: Officials of the Forest Department capture an injured leopard near Kampel village of Indore. A Forest Ranger says, "Leopard was badly injured due to a fight with another leopard. Our team captured him and took him to a doctor." (09.07.20) pic.twitter.com/JTZUMfvmU7

According to a forest official, the animal was injured during a fight with another leopard.

"The leopard was badly injured due to a fight with another leopard. Our team captured him and took him to a doctor," a forest ranger said.

The forest ranger said, "In the Nayapura area of Kampel village, the team reached with cages, one leopard had run away while the other was badly injured, it was not able to see."

After the leopard was caught, it was brought to Indore, where Dr Uttam Yadav started his treatment, he said adding that the other leopard was also traced through the pug marks but could not be found.

The video of the whole incident surfaced on the internet on Friday. Many people praised the forest rangers on social media for rescuing the animal.

"Thanks to Our Rangers...Good Work..," one user wrote.

In June, the forest officials rescued a leopard which fell into a well in Gujarat's Chhota Udepur district.