Taking serious note of the matter, the district magistrate ordered for a probe, to be led by Sub-divisional Magistrate Puvaya Satyapriya Singh. 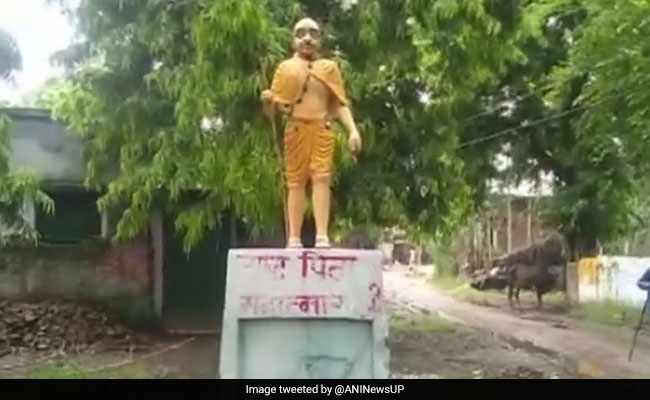 District magistrate said the paint on the statue is light yellow and not saffron.

The Congress today alleged that members of ruling BJP have painted in saffron colour a statue of Mahatma Gandhi installed at a government school in Dhaka Ghanshyampur village in Shahjahanpur and demanded action against them.

However, the district administration downplayed the issue, saying an enquiry showed that the colour on the statue was not saffron but yellow and it had been painted two years ago on the direction of the school administration.

A delegation led by district unit president of Congress Kaushal Misra met the district magistrate Amrit Tripathi today and handed over a memorandum demanding immediate action against the miscreants who painted the statue.

Taking serious note of the matter, the district magistrate ordered for a probe, to be led by Sub-divisional Magistrate Puvaya Satyapriya Singh.

"I sent the party's block unit president Rahul Sharma to the primary school where the statue was installed. He found the statue painted in saffron. He even clicked photographs," Mr Misra said.

The party members in Lucknow and Delhi have been apprised of the matter. Mr Misra said ruling party members are behind the incident as they are using it to divert public attention from pressing issues.

The DM said a team of officials sent to the spot found the painting work done over two years ago.

"The paint on the statue is light yellow and not saffron," said the DM, adding, "Two years ago, the then principal Snehasu had ordered repairs and painting works as part of which the statue got a coat of light yellow paint. The incident is being made an issue now."

Responding to the administration's claim that the painting was done two years ago, the Congress leaders said if that was the case then the matter would have come to light earlier and not yesterday.