In the video, the assistant sub-inspector can be seen kicking and slapping the men who had come there in connection with a family dispute. 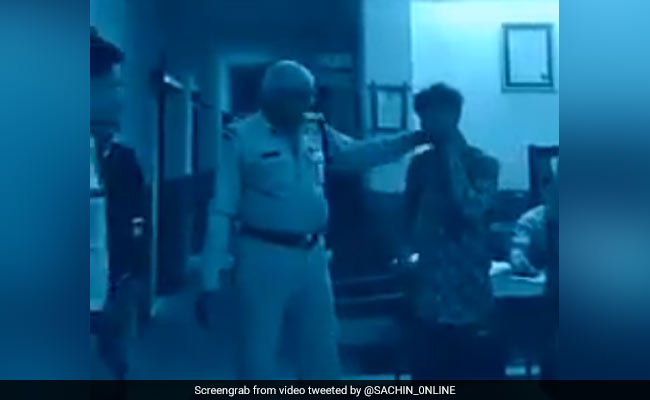 The cop is also heard threatening to put a group of people behind bars.

An assistant sub-inspector caught on camera assaulting men and misbehaving with women at a police station in Indore in Madhya Pradesh was suspended, a senior official said on Tuesday.

The incident happened on Monday night when a group of people had reached Palasia police station in connection with a family dispute.

In the video, which was widely shared on social media, the ASI, manning the "welcome desk" at the police station, can be seen kicking and slapping the men who had come there in connection with a family dispute.

He is also heard abusing the women accompanying these men, and threatening to put the group behind bars.

"ASI RK Mishra of Palasia police station has been suspended with immediate effect and a departmental inquiry has been instituted. No policeman has the right to behave indecently with common people. Such behaviour cannot be tolerated," said Senior Superintendent of Police Ruchi Vardhan Mishra.

The suspension came shortly after state minister Bala Bachchan expressed displeasure at the incident while speaking to reporters.

"No police officer is above the law. If a policeman takes the law in his hand, then appropriate action will be taken against him," he said.