Lion Sneaks Into Farmer's Home, Relaxes On Heap Of Groundnuts

A video of the lion sprawled on the groundnut heap went viral on social media. 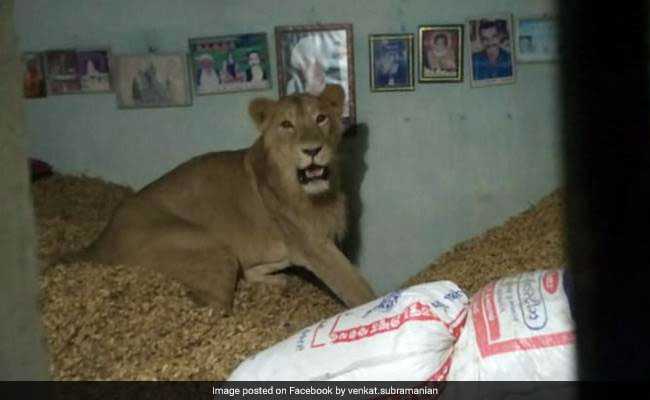 The lion sneaked inside the house Sunday night from nearby Gir forest.

A farmer in Patla village in Gujarat's Amreli district was greeted with a strange, albeit apprehensive, sight of a lion relaxing on a heap of groundnuts stored in a room in his house.

A video of the lion sprawled on the groundnut heap went viral on social media.

Forest officials said Patla village is located on the edge of the Gir forest, the only abode of the Asiatic lions.

The lion sneaked inside farmer Jilubhai Vala's house Sunday night from nearby Gir forest and on the way had also killed a buffalo calf, belonging to the farmer, around 10 pm, a forest official said.

"We had received call from Vala at around 10 pm Sunday saying that a lion had entered a room of his house. After a 2-hour operation, we managed to get the lion to leave and make its way to the forest safely," Tulsishyam RFO P R Patel said on Monday.

"It is not unusual for lions to enter villages like Patla, as Gir forest is only a few kilometres away. These big cats enter villages regularly looking for prey," Mr Patel said.

Fire Breaks Out At 3-Storey Commercial Building In Mumbai's Andheri