RK Nagar By-Elections 2017: The DMK had alleged that the ruling AIADMK has distributed Rs 100 crore to voters. Its senior leader MK Stain said Rs 6,000 has been paid to each voter and the operation had the support of the police. 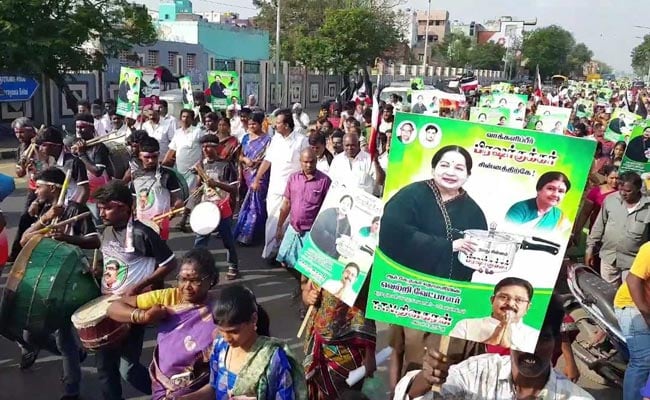 Chennai: The campaigning for Chennai's RK Nagar -- the assembly seat that fell vacant after the death of former Chief Minister J Jayalalithaa - came to an end this evening amid allegations of bribery and circulation of unverified videos of notes distribution. The by-election will be held on Thursday, with the Election Commission refusing to postpone it further despite pleas from the opposition DMK.

The DMK had alleged that the ruling AIADMK has distributed Rs 100 crore to voters. Its senior leader MK Stain said Rs 6,000 has been paid to each voter and the operation had the support of the police. The money, he alleged, had even been "transported in police vehicles".

The AIADMK has said its sidelined leader TTV Dhinakaran, who is contesting as an Independent, is distributing the money.

On Saturday, the election was dragged into controversy after Rs. 13 lakh in cash was seized from a physiotherapy centre in Chennai. Officials said it was the largest cash haul during this election.

In April, after allegations that AIADMK was bribing the voters, a raid by Income Tax officials at the home of the state's health minister C Vijaybaskar had detected documents that suggested that Rs. 89 crore has been paid to voters by Chief Minister E Palaniswami and his ministers.

For the AIADMK, which has survived huge upheavals over the last one year - a near-split in bid for power, sidelining of leaders VK Sasikala and her nephew TTV Dhinakaran, factionalism and demands for pulling down Chief Minister Palaniswami -- the election in RK Nagar is a crucial one.

Jayalalithaa had represented the constituency twice and it is now considered her legacy. The by-poll is also the first election the ruling party is contesting after her death and a defeat here will be a huge psychological setback.

The AIADMK has fielded veteran party veteran E  Madhusudanan . He's a former Minister and present Presidium Chairman of the party.

Promoted
Listen to the latest songs, only on JioSaavn.com
The party's sidelined leader TTV Dhinakaran, who is contesting as an independent has finally settled for the pressure cooker symbol after his demand for the two-leaves symbol of the AIADMK was turned down by the Election Commission. "People will not vote for the two leaves. They would only vote for the cooker and help us to take two leaves back," Mr Dhinakaran told NDTV.

The DMK, which sees this as a referendum on Mr Palaniswami's government, has fielded a little-known lawyer, Marudhu Ganesh. The BJP too, is in the race.