Give A Book, Take A Book - Chennai Start-Up's Bid To Revive Reading

Book lovers can send and receive books from their homes using the web and app-based platform bookexchange.in.

Launched in November 2019, the company has exchanged around 7,000 books so far.

Most cities have still have libraries or reading clubs yet books often face a difficult time competing with smartphones and videogames when it comes to attention of young people. In a bid to revive reading habits among people in Chennai, a start-up is now offering a book for every used book given to them for circulation.

Book lovers can send and receive books from their homes using the web and app-based platform bookexchange.in. The same books can be exchanged for umpteenth times as part of new reads.

There is no service fee but readers pay for shipment, a part of which goes as revenue to the company.

Founder Manikandan Krishnan, who quit his corporate career to launch bookxchange.in, told NDTV, "Even if you have four books to give you could end up reading 50 to 400 books in a year. The idea is to get more people to read, reduce cost of books." 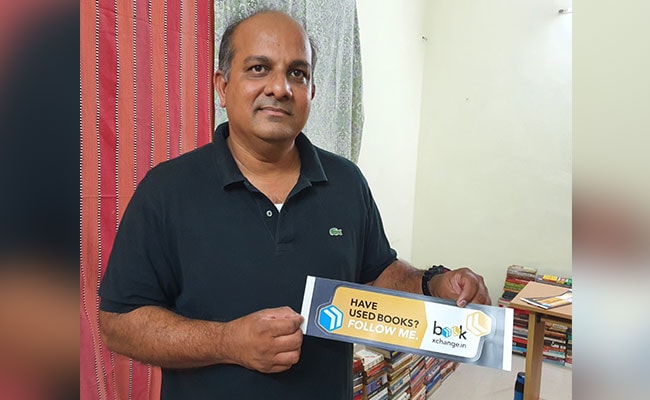 Launched in November 2019, the company has exchanged around 7,000 books so far. Though fiction forms the core of it's collection, Mr Krishnan says of late, books from other genres too are coming into circulation.

"Lots of people are opening their home libraries to us once they know we are genuinely giving to book lovers. Lots of rare books are being given to us including books from the fifties that are no longer published," the voracious reader said.

Mr Krishnan's small team, at house-turned-warehouse, scans hundreds of books to pick up and dispatch titles sought by their customers.

Mr Krishnan says book publishers will not be worried about this model as the start-up is nurturing reading and many will ultimately buy new books.

The company has invested close to Rs 1 crore bootstrapping and has contacted schools, colleges and communities to engage with book lovers.

At a recent four-day campaign at a Chennai exhibition, two families donated more than 500 books.

"People are excited about this model. Also, for every sixty six books being read this way, we save a tree. That's a positive impact on environment," Shankar Ranganathan, head, customer engagement said.

Despite the perception that reading habit is dwindling, the company is confident about the opportunities available.

"Lot of kids are taking to physical reading, they are getting back to books. Digital stuff is being used by 40-plus year olds. We have an opportunity to build one of the largest libraries in the world," said Mr Krishnan.