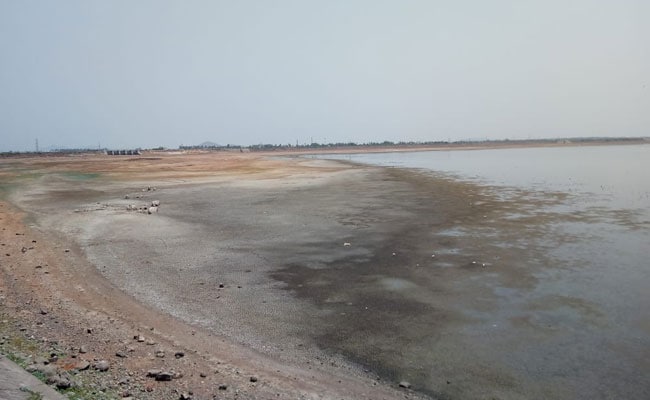 The 3,500 million cubic feet capacity reservoir is left just with storage of silt and slush

Chennai's largest source of drinking water, Chembarambakkam lake, is bone dry with parched and cracked bed all over. The 3,500 million cubic feet capacity reservoir is left just with storage of silt and slush in the middle largely due to deficit monsoon last year. It was this very lake that overflowed and flooded Chennai in December 2015.

Chennai Metro Water, which supplies drinking water, has cut piped supply by 40 per cent. T Kalaiselvi, a resident of Teynampet, says she gets just five pots of water everyday. Washing her clothes using little water, she told NDTV, "Before elections we were getting water regularly. Now we don't get regular supply. We get water just for one hour and half the time it's like toilet water. Tankers come only around 10 or 11 am. It's so difficult."

Many areas like the IT Corridor with an estimated four lakh homes and 12 lakh residents are also at the mercy of private tankers, paying up to Rs 1,500 a month for water. The city has not provided them piped supply though residents say they pay water tax.

With water scarce, there is no fish to catch and sell. A few hundred metres from the lake, Chitra and Vijaya are disappointed as the drought has hit their livelihood. "Earlier we could sell fish up to Rs 1,000 a day. Now we hardly get Rs 500. There's very little fish in the lake," Chitra said.

The cattle are also struggle to find a source of drinking water. Paramasivan, a shepherd with 200 sheep, takes his livestock to the dry water bed so the animals could somehow find some water.

Officials say they are tapping agricultural wells and lakes in neighbouring Tiruvallur districts besides Veeranam lake in Cuddalore district, and are confident they would be able to ensure at least a limited supply till monsoon brings relief in June.

Many say it's a wake-up call to increase water storage by building a reservoir and a desalination plant to quench Chennai's thirst.