6 Sri Lankans Refuse To Leave Chennai Airport Without "Their Gold"

The six men, claiming to be gold traders from Sri Lanka, are refusing to leave the Chennai airport till they get their gold back. 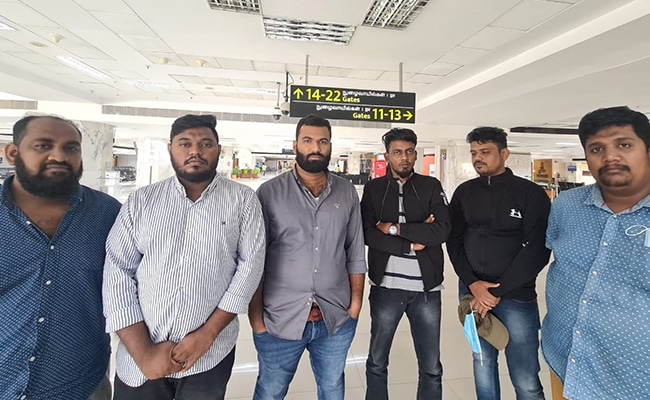 They allege Indian Customs authorities stripped and assaulted them.

Six Colombo-bound Sri Lankan transit passengers have been protesting for over one week at Chennai International Airport, alleging Indian authorities illegally seized their gold weighing 7 kg and staged a drama that the gold was found abandoned in a plane's toilet.

Customs officials are adamant that the gold was recovered from the flight lavatory and at restrooms of the international terminal.

The six men, claiming to be gold traders from Sri Lanka, are refusing to leave the Chennai airport till they get their gold back.

"Our Indigo flight from Dubai landed at around 4:10 AM. They took us to the terminal only at around 9 AM. They kept us in the flight for five hours. We need our gold. We will not leave for our country without it," Ishanul Haq, one of the men, told NDTV.

The Lankans, with boarding passes to Colombo obtained in Dubai, have also shared documents related to the purchase of the gold at Dubai's airport.

They allege Indian Customs authorities stripped and assaulted them besides taking away their mobile phones.

Customs authorities had earlier claimed the gold was found abandoned in the plane's lavatory. However, a senior officer in the know of these developments and who did not want to be named admitted to NDTV that the gold was indeed seized from these transit passengers from Sri Lanka.

"This is illegal. Seizures can't be made from transit passengers. Over-enthusiastic officials have done this to show a larger seizure. Only an order from court can bring out the truth," he added.

The Sri Lankans have engaged a lawyer and are seeking a probe for the return of what they call "their gold".

"They are answerable to Sri Lankan Customs only. They don't have Indian visas and are only transit passengers with boarding passes for their Colombo flight collected in Dubai and they have no reason to dump the gold in toilets as the officials claim," Mr Hussain said.