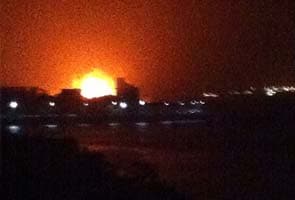 Mumbai/New Delhi: In a huge setback to the Indian Navy, its INS Sindhurakshak submarine recently refurbished by Russia, exploded in the early hours of Wednesday at a high-security military dockyard in Mumbai. The search is on for about 18 sailors feared trapped in the burnt vessel, which is now partially submerged.

All about the submarine: