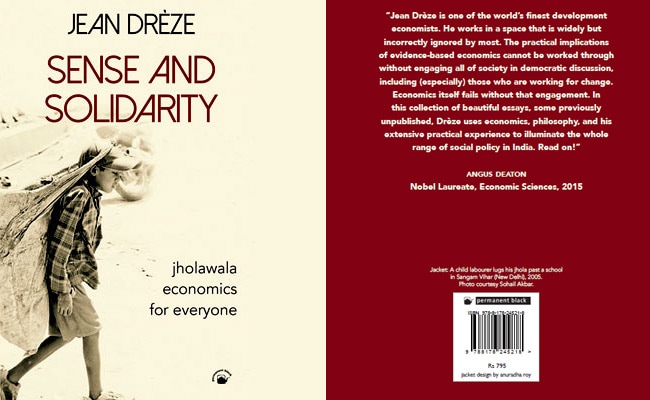 Around the corner from my office at Ranchi University in eastern India is a wide avenue that leads into the city, called Kanke Road. If you go there at the crack of dawn, you will see something you may never forget: hundreds of young men, many emaciated and dishevelled, pushing bicycles loaded with more than two hundred kilograms of smuggled coal. Under the cover of darkness, they have walked twenty or thirty kilometres with this stupendous load to sell it in Ranchi and earn just enough to feed their families. Some of them, I am told, dig out the coal from below the land they used to cultivate, before they were forcibly displaced.

This sight often reminds me of George Orwell's 1937 essay "Down the Mine", especially its last sentence: "You and I and the editor of the Times Lit. Supp., and the poets and the Archbishop of Canterbury and Comrade X, author of Marxism for Infants - all of us really owe the comparative decency of our lives to poor drudges underground, blackened to the eyes, with their throats full of coal dust, driving their shovels forward with arms and belly muscles of steel." Replace underground with "on the road" and shovel with "bicycle", and the sentence applies word for word in Ranchi today.

These young men are known as koilawalas (coal guys). I remember seeing the photograph of a koilawala for the first time in P. Sainath's book Everybody Loves a Good Drought, published twenty years ago. The koilawala of today looks the same. Perhaps he has better footwear, and, quite likely, his children are now going to school. But the nature of his predicament has barely changed. It is not very different from slavery, except that he is driven by economic necessity instead of physical coercion.

Another thought often occurs to me when I see the koilawalas. How come they are in their situation, and I in mine? The only answer I can find is: "chance". Perhaps a few of them drank or gambled away their land, but most are in that situation for no fault of their own. They were born in a poor family of the wrong caste, suffered from undernutrition in childhood, did not get a chance to study, and so on. In a different environment, they might have become geologists, engineers, artists, or hockey champions. But they never had a chance.

In India, as elsewhere, the privileged tend to nurture the illusion that they "deserve" what they have. This illusion, however, evaporates with even the most casual introspection. Sure, some rich people work hard - but so do koilawalas, construction workers, and domestic helpers. Other bases of privilege have little to do with personal merit: our aptitudes, health, inheritance, social connections, and other assets derive from contingencies (such as the accident of birth) over which we have no control. Even our education reflects inherited circumstances, and our parents' and teachers' efforts, far more than our own. All this is without going into the fact that wealth and power often build on corruption, exploitation, and crime.

If our situation is more a matter of chance than personal merit, then surely the privileged have a responsibility towards those who are left behind. We cannot prove that the privileged owe something to the rest, any more than we can prove that theft is wrong. But both can be thought of as sensible principles of a good society.

None of this, of course, tells us what should be done to ensure that everyone is able to live with dignity. Some people believe that the best thing to do for the koilawalas is to create a business-friendly environment so that the economy grows faster. Others might advise the koilawalas that armed struggle is the only way to change the system. I hope that this book will convince you - or reinforce your conviction - that there are other options too...

... For want of a better phrase, the essays in this book can be said to deal with various aspects of India's "social development" in the broadest sense. Social development is often reduced to specific matters on which quantitative indicators happen to be available, such as child health, elementary education, and gender inequality. These matters are undoubtedly important, and figure prominently in the essays. However, there is a great deal more to social development, seen as the endeavour to create a good society.

The abolition of caste, for instance, can be regarded as a critical aspect of social development in this large sense. Quantitative indicators on the abominations of the caste system are scarce (perhaps no accident), yet leaving out this issue from the ambit of social development would be like ignoring "the monster that crosses our path", as Ambedkar described the caste system. Similar remarks apply to patriarchy and other forms of arbitrary power. The expansion of democracy - still very limited in India, as elsewhere - is another natural concern here.

Going beyond these obvious examples, the abolition of violence, or at least of armed conflict, also seems to me an integral part of social development. The same applies to the progress of ethics and social norms. To illustrate: the spread of civic sense and public-spiritedness can be of great help in preventing corruption, crime, exploitation, and environmental vandalism among other anti-social activities. Then there is the destructive power of modern technology (for instance, through nuclear war or climate change), which has reached frightening proportions and keeps growing. Unless ethical development catches up with technological progress, humanity - or even life on earth - may not survive much longer.

Promoted
Listen to the latest songs, only on JioSaavn.com
The essays that follow do not make more than tentative forays into these big issues, but they are influenced by this concern to enlarge the boundaries of social development. As Noam Chomsky says, it is useful to distinguish between our visions ("the conception of a future society that animates what we actually do") and our goals ("the choices and tasks that are within reach"). This book is largely about goals - and action - in the field of social development, but I hope that it will also contribute to a clearer vision of the sort of society we can aspire to create.

Excerpted from Sense And Solidarity by Jean Dreze with permission from Permanent Black.