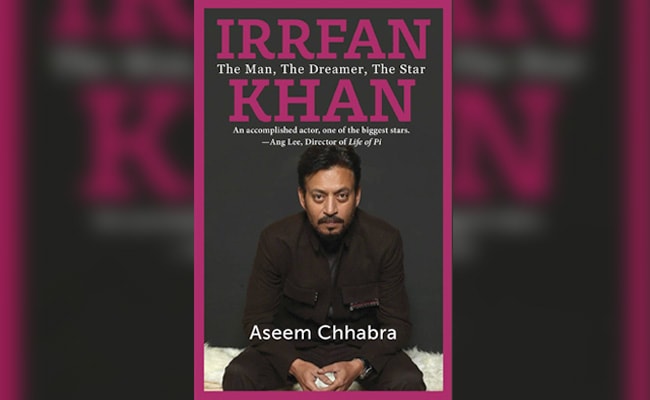 Cover of Aseem Chhabra's book 'Irrfan Khan: The Man, The Dreamer, The Star'

Irrfan's powerful performance in The Namesake and also in Michael Winterbottom's A Mighty Heart (2009) was noticed by an American actor, Dan Futterman. Dan played the American journalist Daniel Pearl in A Mighty Heart (more on the film a little later) and also stepped into the role of an executive producer on the HBO series In Treatment (2010), a remake of an Israeli show, BeTipul (2005).

Besides Irrfan being cast in seven segments of the HBO show, there was another connection with The Namesake. The In Treatment team had hired Jhumpa Lahiri as a consultant. The segments with Irrfan were written by playwright and Pulitzer Prize nominee, Adam Rapp, who mined into Jhumpa's experiences and memory to understand Bengali culture. In an interview with The New York Times, Rapp said this about Irrfan, 'I...wanted to write for an actor with a sense of humour and great depth. I truly think Irrfan is one of the greatest actors alive.'

In both the American and Israeli shows, a therapist (Gabriel Byrne in the American series) meets with his clients for half-hour sessions. Irrfan plays the role of Sunil Sanyal, a middle-aged Bengali widower who has recently arrived in the US and moved in with his son (New York-based actor Samrat Chakrabarti) and his American wife. Sunil is depressed because of the loss of his wife, but he is also having a tough time coping with how much his son has changed, and especially, his daughter-in-law's American way of life.

Irrfan gives a devastating performance in the show, first presented as a dishevelled-looking, depressed man who is also rather quiet. Although, as time progresses, he gets more comfortable with the therapist, Dr Paul Weston (Gabriel Byrne).

Irrfan has gone on record to say this was the toughest role he has played. Speaking to The New York Times, he said, 'An emotional input into the part was needed, and from the beginning I was feeling, "I'll fall short. Where will I draw on these things from my life? I don't have any experience in them." And they were intense.'

Also, the show had long takes, nearly 14 minutes each, and so, for the first time since Irrfan had graduated from NSD, he had to memorize long passages of the script. It reminded him of the time he was studying for his exams. It became such a challenge for him that one night he called Naseeruddin Shah in India for his advice.

As Naseer recalls, this is how the phone conversation went. 'Irrfan called and said, "Mere char-char page ke dialogues hain. Kaise memorize karoonga? Aap kaise yaad karte ho?" Maine kaha, "Bhaiya time kitna hai aapke pass?" He said, "Ek raat hai." "Phir to yeh raat to gayee tumharee. Sona wona bhool jao. Raat bhar baith kar yaad karo. Koi aur tareeka nahi hai. Koi jadoo ki pudiya nahi hai mere pass. Main hazaar dafa padhta hoon tab yaad hota hai. Is raat jitni baar padh sako padh lo."' ('Irrfan called and said, "I have dialogues as long as four pages. How do I memorize them? How do you memorize such long dialogues?" I asked him, "How much time do you have?" He said, "Only one night." "Then this night is gone. Forget about going to sleep. Sit up the whole night and memorize it. There is no other way. I don't have any magic trick. I read dialogues one thousand times, only then I am able to memorize them. So tonight try and read the dialogues as many times as you can."')

'And he delivered,' Naseer adds. 'He's very good in the show.'

To work with Irrfan, especially fine-tuning his Bengali accent, HBO hired the actor's friend and director, Aditya Bhattacharya. 'My paperwork said acting coach, which is very strange, because you can't be an acting coach to Irrfan,' Aditya says. They spent time together in Irrfan's hotel room in Times Square while the actor would learn his lines for the show.

Soon Aditya realized that the darkness of Sunil Sanyal's character was having an adverse effect on Irrfan. 'I am his friend, but I felt I became almost the wife who had to hide the drinks, make sure he goes to bed on time,' Aditya adds. A few times at night when Aditya would be heading back to where he was staying, he would be in half a mind to return to be with Irrfan. He even made a few calls to talk to Sutapa Sikdar who was in Bombay at that time, informing her that he was concerned about Irrfan's well-being. 'I literally felt worried for him,' he adds. 'There is a fragility to an actor and we don't realize how much what they do affects them.'

No wonder Irrfan told Anupama Chopra during an interview that when the show ended, he yelled loudly, as though he had won the World Cup.

Excerpted with permission of Rupa Publications India from 'Irrfan Khan: The Man, The Dreamer, The Star' by Aseem Chhabra. Order your copy here.

What It Took To Report From Kargil During War