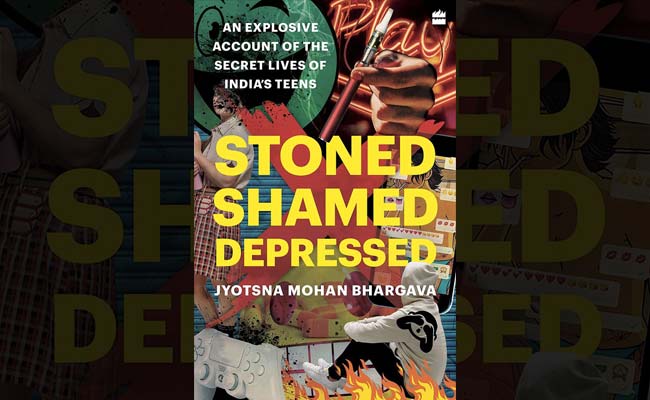 The cover of 'Stoned, Shamed, Depressed: An Explosive Account of the Secret Lives of India's Teens'

In the mid '80s, Madonna's 'Like a Virgin' upset many conservative Indian ideals at a time when even dating was discouraged, leave alone pre-marital sex. Things have come a long way since. Today when you meet the mob, the pop singer's gyrations seem like a Macarena rendition.

'I was twelve when I first had sex,' says seventeen-year-old Priya. 'The guy was about nine years older than me, in the second year of college, and lived two doors away. The attention he showed me was very different, I have always craved validation from older people. I knew what sex was by the time I was ten and two years later, I was pretty sure I knew what it would feel like. He treated me - and it sounds very clichéd - like the only girl in the world. I thought I wouldn't regret it and I still don't.'

Priya is now the go-to person in her school for advice on sexual matters for other girls. She says she doesn't like using protection but knows the risks and trusts the guy − the word trust again. Honestly, virginity is hyped up a little too much today because it is like a status symbol,' she adds. 'To fit in a lot of teens think it's cool to lose it and say hey, I can get some action. I think for a lot of teenagers, peer pressure is big because being accepted by your friends' circle and kids your own age is very important. Not just teens but people in general, I think we all love attention, we all love validation and love to be loved. So, for that thirst of being liked, I think we take virginity as something to just get out of the way.'

So, now when some reports say Gen Z is having less sex than previous generations (since their oldest is twenty-five, perhaps anyway let's give them some time), one must know that sex now doesn't mean just intimacy, whether physical or emotional. Snapchatting nudes − how else can one define it? 'The entire concept of flashing ... Snapchat serves the purpose. Everything has to be recorded, like a drag of a cigarette and then it disappears in five minutes,' says Mohit, a father.

Alice has now emerged from the rabbit hole sexually empowered; but her level of confidence depends on her last hook-up. Many parents though may be left wondering if they are at the wrong tea party. 'There is a very big concept of hooking up, especially among girls,' says Annika. 'The peer pressure is such that if a girl has not had sex by the age of seventeen she is looked down upon. It's not a big deal because relationships are superficial, and everyone is cheating on everyone. It is very cool to have a "main chick" and "side chick". This is a big influence of the hip-hop culture.' The American TV show Sex and the City had a famous quote on relationships: 'Monogamy is on its way out again. It had a brief comeback in the 90s, but as the millennium approaches, everyone's leaving their options open.' This now seems to be holding true across India's cities.

Alice though isn't alone because it always takes two to tango, the mad hatter wants his own adventure.

There was the case of the fourteen-year-old boy and his girlfriend, who was also his classmate. They were caught having sex in school despite having two friends stand guard outside the dance studio. The school felt it was better if they left − once again it was easier than facing irate parents. Despite being exceptional students and athletes, the school decided to expel them. 'It's a difficult choice,' says Sonya, mother of a teen girl. 'If the school doesn't act, then everyone will think it's a licence to do whatever they want at school. But I also feel it's harsh to be thrown out for something like this.'

Should the punishment meted out to two consenting minors and to those belligerently discussing rape be the same? Curiosity and recklessness − encouraged by social media are not the same as being fearless − of God, parents or society. Yet, it seems both instances are given the same sweeping treatment by those in authority - of banishment.

'Kids making out is natural, we cannot take such harsh measures for it,' agrees Shibani. 'Unlike what happened in the Mumbai WhatsApp chat case, it's not aggressive. To suspend them is a bit harsh. They are exposed to so much. You just have to teach them that there is a time and a place for everything.' She hopes that parents can recognize a genuine mistake for what it is. But often it's easier to close your eyes and alienate an already vulnerable teen community further. 'At that age, a child needs emotional safety and security,' says a counsellor. 'He needs to have the assurance that his teachers and parents will correct him but never discard him.'

But have a few parents already discarded their kids, with neither realizing it even now?

Excerpted with permission of HarperCollins from 'Stoned, Shamed, Depressed: An Explosive Account of the Secret Lives of India's Teens' by Jyotsna Mohan Bhargava. Order your copy here.