Will Break Your Phone And Bones, I Was Warned

Reporting in a war zone is supposed to be dangerous, but who would have thought reporting from a court of law would be intimidating and threatening?

Today, a Delhi court turned into a conflict zone. People doing their jobs - reporters like me - were beaten up along with JNU students and teachers, and those who tried to intervene weren't spared.

This is what happened:

Around 1:30 pm, I was inside the court room of Metropolitan Magistrate Lovleen for the bail hearing of JNUSU president Kanhaiyaa Kumar. It was a completely calm court room with lawyers, journalists and senior faculty from JNU waiting for the court proceedings to start. Out of the blue, some men in black jackets (the sort lawyers wear) and some in civil clothes came in and shouted at the teachers, "What are you anti-nationals doing here? Leave this place, this is not JNU, go back to Pakistan". They turned to me next. "Are you a JNU student? How dare you enter here, this is our court, not your JNU, leave now else you will be harmed."

A little later, the cops came in and escorted all the teachers out and asked us to stay outside the court since the place was turning volatile. I moved to the lobby to figure out who these people were.

Outside, Horror. Some 100 men dressed as lawyers were shouting, "Who all are from JNU, leave now, or else we will send you out our way, bach ke nahi jaogay, maar maar ke Pakistan wapas bhej dengey (anyone from JNU leave now, we will not spare you, we will beat you and send you to Pakistan)". 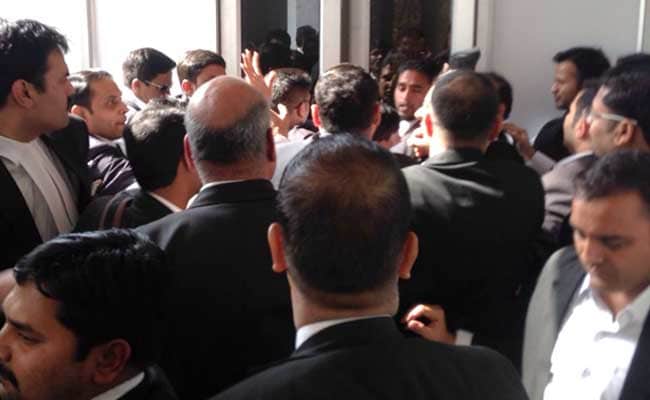 They were picking up anyone who looked like a JNU student and started beating them black and blue with slogans like "Bharat Mata ki jai".

This was happening in 8-10 places across the premises, we discovered.

Since cameras are not allowed so near the court, I started recording the violence on my phone. I managed to capture several unprovoked beatings by the men dressed as lawyers, but then someone noticed me recording. I quickly tried to get lost in the crowd.

The main gates were closed, so I rushed back to the courtroom since it was quiet there now and started emailing all the footage to the NDTV office. Another journalist from IBN7, Amit Pandey, joined me in the courtroom.

Seconds later, some 15 men came charging inside the courtroom, raging with anger. "Did you take videos! Delete it now!" was their demand.

Before I realised what was going on, they started beating Amit. They slapped him several times, kicked him in the gut and beat him with sandals.

I stood there shell shocked. Amit had not taken videos, I had, and he was being beaten up because he was standing with me. 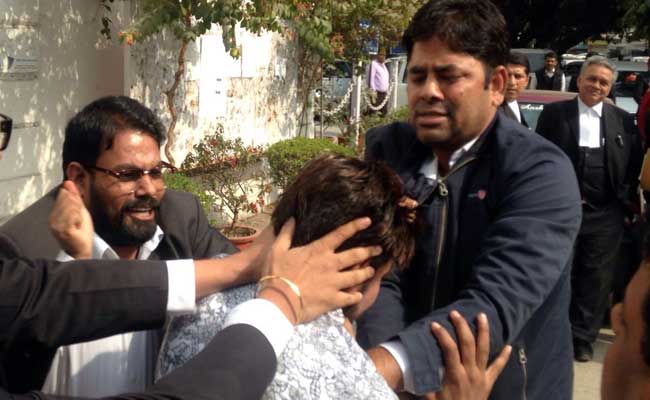 Behind those 15 angry goons stood 4-5 cops. I asked them to intervene but they simply left the courtroom. At that stage, I felt the real danger - it was me against 15 dangerous men in an empty courtroom and Amit was taking one blow after another.

By some miracle, a fresh batch of lawyers came in and tried to save Amit; they asked me to run away. But where would I go? Outside there were many many more such angry men in black coats.

A young lawyer looked me in the eye and asked me to follow him. His friends made a human chain around me and managed to get me out of the court premises.

After they left me, they went back to bring Amit as well. I don't know who they were or their names, but I owe them a huge debt. They saved me.

In this very intolerant society, I thank those who had to courage to save us.

And I really hope those goons hiding behind black coats are identified and justice is served.