When Pakistani Forces Fired Missile At IAF Helicopter I Was On 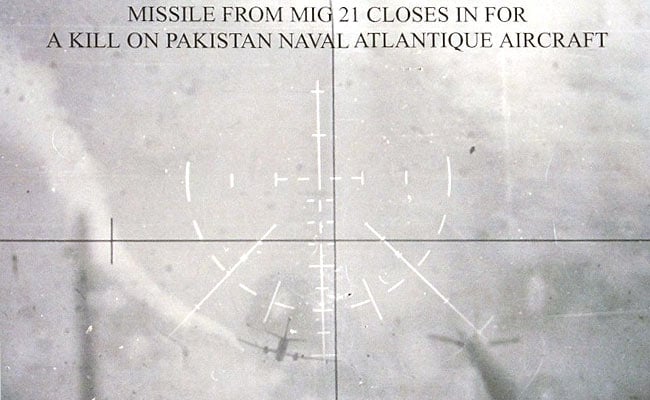 Seconds before impact - An IAF R-60 air-to-air missile flies towards the Pakistan Navy Atlantique shot down in August 1999. The next day, journalists flying to the crash site were targeted by the Pak Army. Image Courtesy: Indian Air Force.

"I saw a huge flash at the same level we were flying at. It was just three to four hundred metres away from us.

On August 11, 1999, 38-year-old Squadron Leader Pankaj Vishnoi was at the controls of an Indian Air Force Mi-8 transport helicopter when he came under a missile attack from Pakistani ground forces.

He was flying the trailing chopper in a loose formation of three IAF Mi-8s.

There with 50 international journalists in total on board the helicopters.

I was one of them.

Squadron Leader Vishnoi, then the commander of the IAF's 119 Helicopter Unit, based in Jamnagar, was in command of my chopper. His first officer was Squadron Leader SP Singh.

We had taken off from Naliya Air Force base in Gujarat and were flying towards the Sir Creek region in the Rann of Kutch to spot the wreckage of a French-built Atlantique maritime reconnaissance aircraft flown by 29 Squadron of the Pakistan Navy.

A day earlier, this Atlantique had breached Indian air space on what the IAF believes was a mission to probe India's defences in the area and gather electronic intelligence.

At 11:17 am on August 10, one of two Indian Air Force MiG 21s which had been scrambled from the Naliya based No.45 Squadron to intercept the Pakistani aircraft locked on and fired a Russian built R-60 air to air missile at the Atlantique. The infrared homing missile flew straight and level to the port (left side) engine of the Pakistani Navy aircraft and exploded. The aircraft went out of control, spiralling down and crashing at about 11:30 am.

All 16 personnel including five officers onboard were killed.

The debris lay on both sides of the International Border in North Gujarat.

Pakistan's information warfare machinery was, typically, quick off the mark. Foreign diplomats were flown to the area and shown the debris of the Atlantique with the point being made that the IAF had intruded into Pakistan airspace to shoot down an unarmed reconnaissance aircraft.

India's attempt to counter Islamabad's account came the next day, a day I should not have survived.

"I made the call to the formation," says Vishnoi, who retired many years later as an Air Commodore.

Pakistani forces had fired a shoulder-mounted surface-to-air missile at our helicopter, possibly a US-made Stinger or Swedish RBS-70, widely considered some of the most potent weapons of its class in the world.

"There was a flash. I saw it. And there was a smoke plume which was visible for several seconds despite the 20 knot (37 kmph) winds which we were encountering." 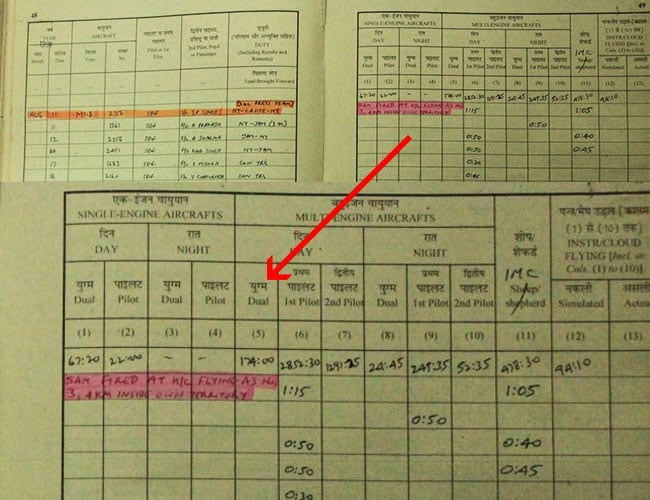 What happened next is a vivid memory.

The Mi-8 helicopter dived down. A handful of journalists who were standing at the time fell and had to clamber back onto the benches mounted along the cabin of the Mi-8.

No one had any idea what was happening.

The helicopter itself was rudimentary. A giant fuel drum fixed to the floor of the cabin was plumbed to the engine overhead. The smell of Aviation Turbine Fuel was inescapable.

The terrain all around in the Rann of Kutch area was flat.

We raced away to safety, our mission to spot the wreckage had to be scrapped.

"We raced away at 180 kmph. We couldn't fly any faster." The "clam-shell" doors on the other two Mi-8s in the formation had been removed to allow camera-crew to film. This meant a speed restriction. "I was leading the formation. There was no way, I was going to fly away faster than the other two choppers."

Inside the cabin, I felt we had lost at least one of the two engines on the Mi-8. Were we attempting an emergency landing? Were there serious control issues?

I walked up to the IAF flight-gunner seated in a jump seat outside the cockpit, the door of which was shut.

"What happened?" I asked.

The flight-gunner had a headphone and was on talk-back to the flight-crew inside the cockpit.

"Suspected missile fired," he told me.

It seemed unreal. This was a worst case scenario one reads about.

Less than a month earlier, covering the Kargil war, I had heard accounts from IAF fighter pilots on how they had seen missiles streak past their fighters as they bombed targets. On May 27 that year, an IAF MiG-21 was stuck by a Pakistani surface to air missile. Squadron Leader Ajay Ahuja, the pilot, ejected, only to be captured and killed by Pakistani forces. The following day, an IAF Mi-17 chopper was downed after being struck by several Pakistani Stinger missiles. All four crew members perished.

The threat of Pakistani shoulder-fired surface-to-air missiles was very real. This had been an unbelievably close call.

At Naliya air base, I rushed to re-confirm my news. IAF officers who were a part of our sortie went into a huddle. A short while later, they confirmed the news to the international media. We had been attacked.

I got on to our satellite phone - and dialled in the NDTV office to do a phone-in. I saw Satinder Bindra, then the CNN Bureau Chief in Delhi, do the same.

As I waited patiently for my turn to break the news, I realised that newsroom priorities in Delhi may as well have been from a different planet.

Vikram Chandra was the anchor - his focus, for the large part of that day, was a total solar eclipse, a big global event that day. There were guests in the studio. There was a science lesson on air.

The mood changed abruptly when I did my phone report.

Kargil may have ended with an Indian victory but clearly tensions with Pakistan were still war-like.

For Squadron Leader Pankaj Vishnoi, this had been the second close call in as many days.

A day earlier, within hours of the Pakistan Navy Atlantique having been shot down, he was ordered to fly into the area, spot and collect the debris. 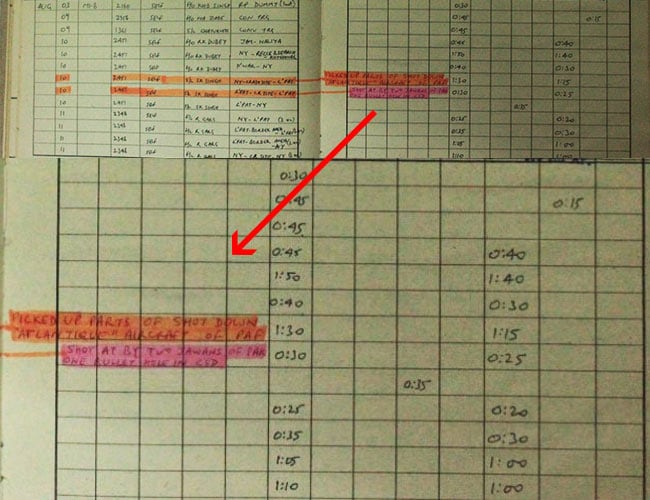 Flight log of Squadron Leader Pankaj Vishnoi of August 10, 1999 which describes his mission to pick up wreckage of the Pakistan Navy Atlantique aircraft which was shot down a day earlier.

"The wreckage was easy to spot. The area was completely barren flat land."

Categorically denying Pakistani claims that the IAF had flown across the border to pick up debris of the Atlantique, Vishnoi says "we landed on our side. We were about five hundred metres from the border."

A Quick Reaction Team (QRT) of the Indian Air Force quickly moved out of the chopper to pick up debris and load it on to the aircraft.

"The ground may have been soggy. I was holding on to the power while the helicopter wheels were lightly touching the ground." Vishnoi waited as the QRT loaded the aircraft.

"We flew to Lakhpat and landed the helicopter. We were ordered to return to the crash site again and pick up more of the wreckage."

Little did Vishnoi know what was in store for him.

"The gap between the first and second sortie to pick up the wreckage would have been just 45 minutes but on the second sorties, there was Medium Machine Gun fire from across the border." Vishnoi had never expected to see Pakistani forces in this remote area.

"There were two people hiding behind a bush and they opened up. I heard the sound. The aircraft was hit." 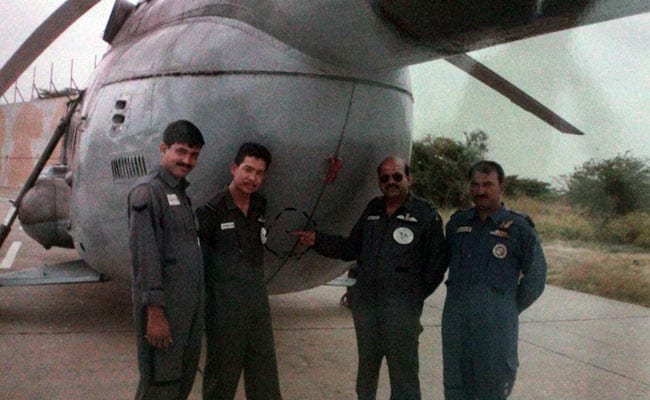 Squadron Leader Pankaj Vishnoi pointing out the bullet holes in his Mi-8 helicopter after it was attacked by the Pakistan Army on August 10, 1999, a few hours after the IAF shot down a Pakistani Navy Atlantique reconnaissance aircraft over North Gujarat.

Unarmed and not authorised to respond with force, Vishnoi rushed back to base.

"One bullet hit the body of the aircraft. It hit the door in the rear and came out the other one. Another bullet hit the trailing edge of one of the tail rotor blades creating a one inch hole."

I spoke to Pankaj Vishnoi, now a retired Air Commodore for the first time on Tuesday, more than 20 years since we had both cheated death along with the other journalists and IAF crew members on the chopper we were flying in.

"Was that your closest call?" I asked Vishnoi.

"This was the closest call for me in all my years in the IAF," he replied.

"But did you know, Vishnu, that of the six pilots on those three Mi-8 helicopters that flew that day, two are dead."

"Flight Lieutenant R Garg and Flying Officer Vikram Singh, both flying the second chopper in the formation are gone." Both were killed in separate incidents over the next several years.

R Garg was killed in a helicopter accident over the Doda valley in Kashmir and Vikram Singh was among nine IAF personnel killed when two Mi-17 helicopters had a mid-air collission near Jamnagar in September 2012.

There was another pilot we met at Naliya Air Force base that day who also lost his life.

The man who shot down the Atlantique, Squadron Leader Prashant Kumar Bundela died in August 2002, four months after he ejected from a MiG 21. Bundela had landed on his neck and was left paralysed.

I ask Air Commodore Pankaj Vishnoi about these losses.

"These are professional hazards," he says.