Notes Ban Is Not About Money, More A Moral Exercise

Prime Minister Narendra Modi's announcement of 8 November  that demonetised 86 per cent of India's currency is not primarily about money, i.e. our medium of exchange. In that initial speech, the PM began with a reference to Diwali, invoked the support of 125 crore Indians, and attacked "corruption, black money and terrorism" as "festering sores, holding us back in the race towards development." He then drew a distinction between "anti-national and anti-social elements" and "honest, hard-working people."

It can be argued that through rhetoric such as this, the PM and his government are targeting something much bigger than money, and that something is value. So what is value, and what is it that we value? The geographer Susan Mayhew suggests that value, simply put, is the importance, worth or usefulness of something. The anthropologist David Graeber indicates that value is best seen as the way in which actions become meaningful to actors by being incorporated in some larger, social totality - even if in many cases the totality in question exists mainly in the actor's imagination.

The demonetised totality that Indians ought to value and work towards is a new "Idea of India" with "queuing (at banks) for a better India" as the BJP has described. This Idea is being forged largely from above, with a mixed response coming from below, i.e. from citizens. At the top (and we are speaking of the very top in a centralised and secretive exercise that has sidelined even the Finance Minister and the Governor of the Reserve Bank of India), we are told to "bear the pain" to help the PM deliver "the India of our dreams."

The new 2,000-rupee note is a very telling artefact of this proposed dream-like India (see below). The note is a tacky hodgepodge of fonts, colours and symbols. We see Mahatma Gandhi, the Father of the Nation, and Mangalyaan, India's low-cost space probe that has been orbiting Mars since 2014. These representations of the old and the new are brought together by (a) the Devanagari script used in Hindi, the language of parts of North India, and of many leaders of the BJP and RSS, but not of the majority of Indians. It is no surprise that the use of Devanagari has already been challenged in the Madras High Court. (b) The PM's mission for cleaning India: Swachh Bharat Abhiyan. In fact "Swachh Bharat" is imposed in Devanagari on spectacles that are widely associated with Gandhi. This is not just about old and new India's coexisting, but about a new India taking over from the old. 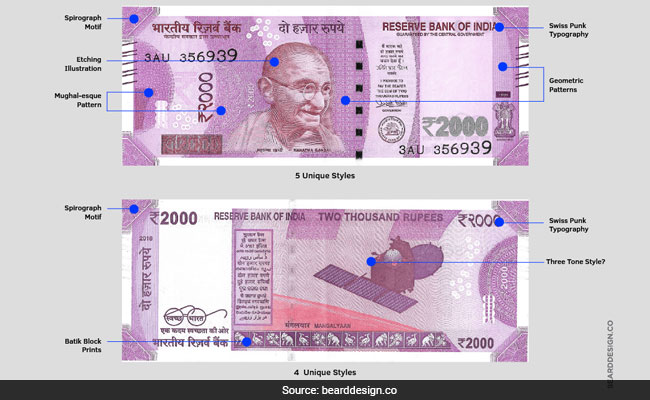 This latest cleaning exercise, or purge, can't really wipe out black money. After all, only about 6 per cent of India's undeclared wealth is held in Indian currency. Much more is held in land and real estate, a sinkhole of undeclared wealth. In fact, news is now emerging that in the days leading up to demonetisation, BJP leaders bought large amounts of land in different parts of the country. While state legislators and functionaries were the signatories, funds for the transactions, in cash and other forms, came from the party.

The embrace of our political parties and the land and real estate sectors is tight and all encompassing. In a decade of research on India's land market, this author has come across land consultants who specialise in investing in real estate for a range of regional and national political parties. Further, the local land dealing syndicates of West Bengal, dalals of Rajasthan, or brokers of Gujarat and Tamil Nadu are integrated with political party economies. They buy and sell land with the backing of the party, and they funnel part of their earnings back to the party. The world's largest democracy would come to a standstill if this nexus were undermined. The current demonetisation is doing no such thing.

Demonetisation may scratch the surface of undeclared wealth and practices associated with it. But more substantively, it can forge alternative social totalities, alternative values. Demonetisation is forging a new moral community, one which participates in everyday corruption almost as a way of life, but externalises the guilt in hyper-nationalist talk of, say, demonetisation bringing terrorism in Kashmir to a halt.

The euphoria over India's so-called surgical strike on Pakistan had barely died down when we have this new surgical strike on black money. Both are especially gleeful about targeting one country and specific enemy-other communities. These communities and their unsavoury practices must be cleansed from our national system, as we make sacrifices and bear temporary pain. This language of sacrifice, sores and healing, pain and surgery is emanating from governmental rhetoric on demonetisation. This is not a financial language. It is a moral one. Of course, in this moral community-building project, the active contruction of "us" versus "them" is not new. It continues the BJP's mission of "one nation, one culture, one people", with demonetisation providing the latest canvas.

The nation-building surgical strike that is demonetisation has had a mixed response from citizens. Farmers have been hit in the rabi sowing season as purchasing farm input has been affected at a critical time. Labour is not being paid on time, or is being paid in currency that is no longer legal tender. Hospitals are turning away patients if they don't have the right kind of notes, and the media has reported many deaths. Yet, there is not universal condemnation of demonetisation.

A recent Indian Express report from western Uttar Pradesh states that the financial hardship caused by demonetisation is obvious. Yet, many people are speaking up in support of what "Modiji has done." They are revelling in the "moral high of a nationwide narrative, of taking part in the fight against black money.' The moral high might come from symbolically fighting the rich and the corrupt, and through this epic battle, or mahayajna in the PMs words, emerging cleaner and more worthy citizens of Modi's India.

Promoted
Listen to the latest songs, only on JioSaavn.com
(Nikita Sud is an Associate Professor at the University of Oxford and a Fellow of Wolfson College.)