Biden Is President-Elect But He Almost Blew It

Joe Biden may be president elect, but he and then Democrats failed to generate the "blue wave" that would have swept nine battleground states. Instead, he has squeaked by in four and marginally won another three. He has therefore left the door open for Donald Trump to claim victory on "legal votes". Given the probability of recounts, court battles and an ensuing deadlock, nothing is off the table. So one could conclude that Joe Biden almost blew it.

The extent of the failure politically can be measured by the complete silence from Republicans on Biden's win. Except for George Bush and Senators Mitt Romney and Lisa Murkowski, none have acknowledged the Biden victory. Instead, Senators Lindsay Graham and Ted Cruz have joined the Trump offensive on legal votes and they are vociferously challenging the idea of a Biden win.

Can Trump pull this legal vote through and stage a comeback? Unfortunately, the short answer is yes, the long answer is that it would take a lot of gumption by Republicans or courts or both to do so. Given that the election does not have to be certified by the Congress until January 6, Trump's strategy is delay, delay, delay.

- Recounts in Georgia, Wisconsin, Arizona are unlikely to change results but will cause delays.

- Move the courts now and after recount. Process will lead to further delays.

Then there could be three scenarios:

1) The Supreme Court intervenes and supports Trumps claim - low possibility but not unlikely.

2) The state legislatures that control Pennsylvania, Michigan and Wisconsin elects a different set of electors - could happen but Democrat Governors could block that.

3) A continued deadlock because of the above. Election goes to the House Of Representative on the basis of one vote per state. Republicans have more states. Trump wins.

These may seem outlandish, but given Trump's lack of respect for precedents, norms and the Republican party's grovelling obeisance, they cannot be ruled out. For Republicans, Trump is the flag-bearer; what he did in this election, from their point of view, is amazing. Not only the narrowness of the electoral defeat, but the fact that he helped Republicans down the line to stay in power across the Senate and in states.

Frankly, for more than two weeks, the winds of change were in the air and instead of dumping Trump and Trumpism once and for all, the lackadaisical Biden campaign seems to have wasted a billion dollars in leaving Trump and right-wing nationalism probably better off than it was in 2016. Maybe it wasn't all Biden's fault, but fighting fire with gentle civility and advertising that only reached out to liberals was a waste.

Take Florida, whose victory gave Trump the heart to claim he had won early on Tuesday night. It should have been a Biden win. Even The New York Times said that if polls were as wrong at 2016 (see below), Biden would win by +2. Instead the Democrats had their worst loss in recent history. The Hispanics left the Democrats in droves, something that happened to a lesser extent across the country, and Whites consolidated around Trump. 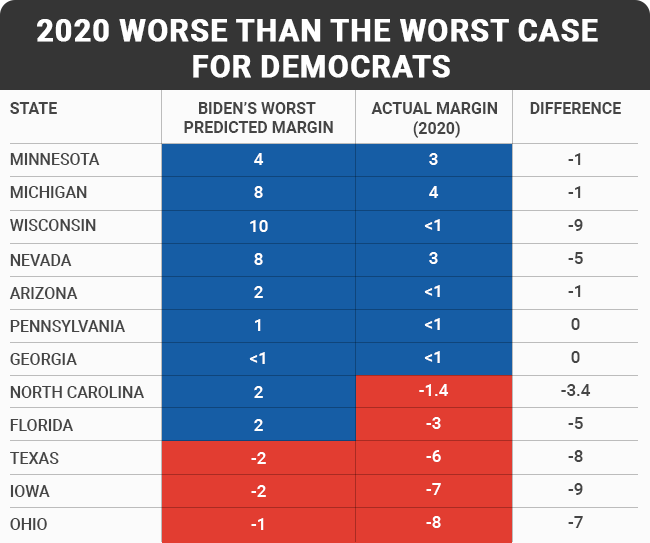 While angst against Trump may have flipped Pennsylvania, Wisconsin and Michigan, putting Biden over the finish line, there was no coattail effect for Democrats. In the very suburbs of Pennsylvania that Biden won, Republicans in Congressional and state elections held firm. Republicans actually gained 5 seats in the House of Representatives and stopped, at least for now, the Senate changing hands.

In the Senate, almost every projection was that the Democrats would come in with at least a small majority. Instead, the Republicans, mainly because of Trump, robustly defended their territory holding Iowa, Montana and Maine (though Susan Collins herself was a factor) and probably North Carolina, amongst those predicted to fall. With no Senate control, Biden's agenda will again depend on Mitch McConnell, the Republican Majority leader, as it did in 2012-2014. Which could mean a do-nothing-Congress for 2 years, until 2022 when Republicans can hope that the trend of the party of the President losing will continue. And if Trump, by some legal jugglery, manages to remain President, then expect more conservatives in the judiciary and no oversight.

The disaster in the states is as important. After every census, as has just happened, state legislatures are redefining constituency boundaries. The party in power in the states resorts to something like gerrymandering. They would, for example, pack all registered Democrats in a couple of constituencies and then ensure Republican majorities in the rest of the districts. The Republicans, by their control of state houses, have been very successful at this, and that is one of the reasons that the majority of state houses remain Republican. So even though Biden may win Georgia, the state house isn't going to change hands.

In this election, Republicans won complete control of two more states, taking their tally to 22 with 2 to come. Democrats control 15 and 11 are mixed, where the house and governor are from different parties (like Michigan).

The impact of this will last for a decade, influence elections to the House of Representatives and the states. In 2010, the Republicans used this very successfully to help engineer their comeback in the House in 2012 though 2018. Having lost a net of 5 seats in the House this year, the chances of losing the House again for most of the decade is going to be high.

Already, the failure of the Democrats to win decisively is bringing out the fissures within the party. The party leadership in Congress is already blaming the progressives' stance on defunding the police, for losing support and their inability to win more. That has put Representative Alexandria Ocario Cortez of New York on the warpath claiming lack of support and that progressives won their seats. That may be so, but in areas where only moderate Democrats win, the leftward swing would seem to have hurt, especially with Trump blasting the Democrats for promising "socialism".

It doesn't matter whether that and defunding was true or not, it seems to have been enough to push many whites into straying towards Republican and Hispanics, especially from "socialist counties" like Cuba and Venezuela, and dumping the Democrats. While early exit polls, like all other polls can be wrong, they do clearly show that:

- More White women voted for Trump than in 2016

- More Hispanics voted for Trump than in 2016

This is a good trend for Republicans and a worrying one for Democrats. As one commentator put, the Democrats have lost the working class White a while ago, and now seem to be on track to lose even minority working class support.

Finally for Trump, why shouldn't he fight this to the bitter end? With court cases and Income Tax claims hanging over his head, he may as well go for broke. If he fails, he can always pardon himself from all Federal 'crimes' and hope that judges he has appointed will see him through the other cases.