As Rahul Lands for Solo Rally in Bihar, Nitish Receives Him at Airport 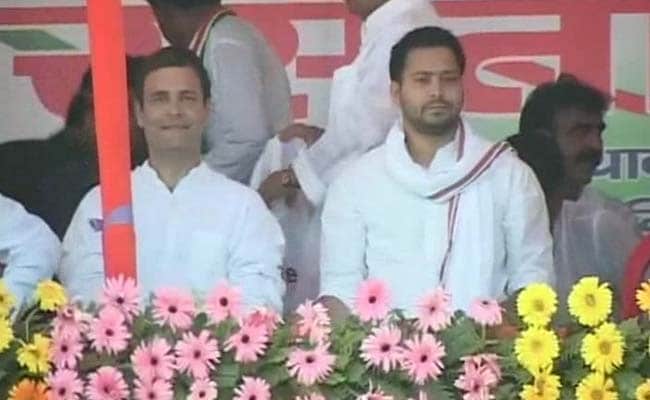 Patna: Rahul Gandhi's rally in Bihar today will be a solo act and not entirely by choice. First Lalu Yadav, and then Nitish Kumar, made it clear that they cannot attend the public meeting in West Champaran.

But when he arrived in Patna this afternoon, he was received by the chief minister. On stage, he sat next to Lalu Yadav's son Tejaswi.

Mr Gandhi is Vice President of the Congress, which has partnered with Lalu, as he is known, and Mr Kumar for the state election which begins next month. Mr Kumar is the team's Chief Ministerial candidate, seeking a third consecutive term.

Lalu said earlier this week that his son, Tejaswi Yadav, will represent their party, the Rashtriya Janata Dal or RJD, at Mr Gandhi's rally. Mr Kumar's party said he is likely to address a press conference with Mr Gandhi on Saturday. And the Congress said the public address is not specific to the Bihar election, but part of a countrywide commemoration of Dr BR Ambedkar's 125th birth anniversary.

Those claims aside, the three-party alliance has, in the months since it was formed in June, squeaked with differences. Mr Kumar and Lalu share a history rich replete with publicly traded insults and accusations. But the teaming up was deemed necessary to check the BJP from leverage the popularity of the Prime Minister to win Bihar. A fourth member - Mulayam Singh Yadav - exited the anti-BJP partnership earlier this month. He has said that he will contest the state with Sharad Pawar's NCP. Though neither party has much influence in the state, it can split the 16% Muslim vote, crucial for Mr Kumar and Co.

In 2013, an effort by the then Congress-led government to protect Lalu from being disqualified as a parliamentarian after being convicted in a corruption case was flamed out by Mr Gandhi. He rejected an ordinance that would have shielded Lalu, a move that the regional powerhouse has apparently not forgiven.